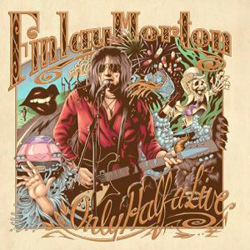 Morton is yet another one of those Scotsmen who can deliver a well-crafted version of bluesy rock (see Tam White, Stevie Agnew, Jimmy Barnes), it’s in their working class bones you see. Well, that’s one myth that was popular at one point but it’s probably more likely that the 50ish long haired Morton spent his youth in Aberdeen listening to Cream, Rory Gallagher, Stone The Crows before moving on to Dire Straits and Chris Rea and to this day still spins discs of a similar nature.

A late starter after a career as a sound engineer (including a period at 10 Downing St. where he was tasked with miking up various Prime Ministers) Morton released his first album in 2006 with this offering his fourth full  length disc. It’s split into two halves (or sides were it on vinyl) with the A side new studio songs and the B side five songs from its predecessors played live with an introduction from Radio Two presenter (and fan) Alex Lester, appropriate as Morton plays the type of radio friendly rock fodder that populates the late night air waves. This live side is a fine capture of a full-bodied rock band cruising the highway with Hammond organ and female backing vocals adding some soulful bite. Lester’s defensive remark, “call me a dinosaur but this is the music I like” in his introduction kind of gives the game away but there’s no doubt that a great many people share his taste and the band do hit a groove throughout with even a hint of The Waterboys sneaking in here and there.

The studio side is in a similar vein (if it ain’t broke…) with the same line up as the live cuts and again it’s pleasant listening with a mild adrenaline lift on the up-tempo Killing Me. It’s not cutting edge but then presumably that’s not what Morton is trying to do, he has an audience and it’s likely that they will lap this up. Not typical Americana UK fodder but well worth a listen if you do like Mark Knopfler or Mr. Rea.