Here at the Forgotten Artists series we don’t necessarily think these artists have actually been forgotten – it’s more that their contribution to Americana may have been overlooked or that they’ve flown below the radar for some fans of the genre. I think this is definitely the case with Hazlewood and Sinatra.

Obviously, no-one has forgotten Frank’s little girl. ‘These Boots Are Made For Walking’ still regularly pops up on radio playlists and there are plenty of us who consider her ‘You Only Live Twice’ to be the definitive Bond theme song. But how many appreciate the significance of the music they made together and the “Cowboy Psychedelia” sound they developed – along with Hazlewood’s wider contribution to left field country music?

Hazlewood was born Barton Lee Hazlewood in Mannford, Oklahoma in July 1929. The son of an oil worker he spent his younger years moving around the States of the south east of the U.S and grew up listening to the pop and roots music of the region. He studied for a medical degree in Dallas, Texas, before serving with the U.S. Army in the Korean War. When he left the military he entered into the music business, initially as a disc jockey but quickly manoeuvring himself into the position of music producer and songwriter, getting lucky relatively quickly and becoming Duane Eddy’s producer, alongside co-producer Lester Sill. Eddy, Hazlewood and Sill became a very successful team, producing and co-writing a series of hit instrumentals, including ‘Peter Gunn’, ‘Shazam’, ‘(Dance with the) Guitar Man’ and the smash hit ‘Rebel Rouser’ all of which made them very wealthy. It was on the back of this success that Hazlewood was approached by Frank Sinatra and asked if he could resurrect the career of his eldest daughter, Nancy.

Nancy Sinatra, eleven years Hazlewood’s junior, had been singing professionally since 1960 but had failed to make much of an impact. She was signed to Reprise, also her father’s label, but was on the verge of being dropped after her singles had failed to make any impact in the U.S and only enjoyed a little success in minor European markets, most notably Italy, where the Sinatra name alone guaranteed reasonable sales. Hazlewood’s first song for Nancy, which he wrote and produced, was ‘These Boots Are Made For Walking’. It was a number one hit in every major music market in the world and earned Sinatra two Grammy Awards for her performance and a Gold Disc for sales in excess of a million copies worldwide. It started a long association between Hazlewood and the Sinatras which would produce a number of hit records for Nancy as well as the successful father/daughter duet ‘Somethin’ Stupid’. It also spawned a series of duets between Nancy Sinatra and Hazlewood that had their roots in country music but were decidedly different in style and content and aimed more at the hip west coast audiences than Nashville. They were the first to record and have a hit with ‘Jackson’, though Hazlewood didn’t write that song and Johnny Cash and June Carter would go on to cover it, shortly after the release of the Lee and Nancy version, and make the song their own. 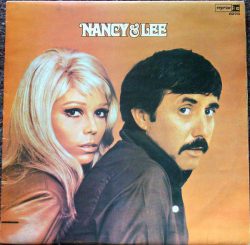 It’s really 1968’s ‘Nancy & Lee’ album, including the Hazlewood songs ‘Summer Wine’ and ‘Some Velvet Morning’, that cemented their position as the creators of “Cowboy Psychedelia”, a description of their sound that started an interest in them that persists today with lovers of slightly twisted music. You can hear that the origins of the songs and their narratives lie in the country and bluegrass music that Hazlewood was brought up with, but they have a sophistication and suggestion of the erotic which was much more in keeping with the Hippy movement of the time. Hazlewood had unearthed a brassiness in Sinatra that hadn’t been heard in her earlier recordings – she said that he told her to “sing like a fourteen year old that fucks truckers” – and he pitched their duets a little lower to suit the tone of his own voice but to also tap into the lower register of Sinatra’s and make her sound earthier.

‘Summer Wine’, released as a single in 1967, was their first Hazlewood penned hit single as a duet, though theirs wasn’t the original recording; Hazlewood had originally cut it with folk and country singer Suzi Jane Hokom a year earlier, but it was the Nancy & Lee recording that caught the public’s imagination. The song is loaded with innuendo and veiled meaning, with “Summer Wine” usually considered to refer to sexual favours, there are also those that believe there are drug references and that the lyric “She re-assured me with an unfamiliar line” refers to snorting either cocaine or amphetamines. What was clear was that it was a familiar country & western story of the man who rides into town only to be robbed of his belongings by an opportunistic woman. While there was never any suggestion, at the time, of a relationship between Sinatra and Hazlewood, beyond their professional one, the chemistry between them can clearly be heard in this song.

Perhaps their most successful duet, and certainly the one that raised the most eyebrows, was ‘Some Velvet Morning’. Moving away from his familiar country & western background, Hazlewood pens a song that draws heavily on the sound of a Spaghetti Western soundtrack, paired with lyrics that switch between a cowboy drawl (from him) and an ethereal response (Sinatra), going backward and forward between 4/4 and 3/4 timing. It’s a weird and dark song and more than a brave track to put out as a single in 1967. In a 2003 article on “The 50 Best Duets Ever”, in the Daily Telegraph, this song claimed the top spot, with journalist Nathan Rabin referring to it as “One of the strangest, druggiest, most darkly sexual songs ever written – ambitious, beautiful and unforgettable.” It was certainly a major departure from anything they had produced before and an ambitious move from Hazlewood’s usual country fare.

Their songs have been covered by everyone from Vanilla Fudge to Lana Del Ray, via all stops in between, and remain among the strangest Alt-Country songs ever written. These late sixties and early seventies recordings from the duo made country-based music acceptable to a wider audience and would help to pave the way for the country-rock scene that emerged from the West Coast at that time.

Hazlewood and Sinatra continued to work together into the 70s, having another major singles success with ‘Did You Ever’, which reached the second spot in the UK singles charts in 1972, but by the mid-70s, Sinatra had significantly reduced her musical activity to concentrate on her husband and children. She and Lee never scaled the creative heights of ‘Summer Wine’ or ‘Some Velvet Morning’ again and you have to wonder what they might have achieved if they could’ve kept that creative partnership going a little longer.

Nancy Sinatra would re-emerge in the 1980s with a country album recorded with Mel Tillis, called ‘Mel & Nancy’ and she continued to record, though sporadically, until 2013. There was one last roll of the dice with Lee Hazlewood, 2004’s ‘Nancy & Lee 3’. It was critically well-received, both voices had matured well and the chemistry of their duets was still there, as can be heard on tracks like ‘Gypsies and Indians’ (perhaps an acknowledgement of Hazlewood’s own Native American roots via his grandfather) but the album wasn’t a commercial success and this was the last time they would record together.

Hazlewood had one other major contribution to the world of Alt-Country and Americana that should be acknowledged. In 1967, at the height of his success, he started his own record label, LHI Records. Among his first signings to the label was the International Submarine Band, led by twenty-one year old Gram Parsons. Hazlewood had a vision of Alt-Country long before that term became popular and he saw a lot of promise in this young band. It was, by all accounts, a difficult relationship. Hazlewood loved the band’s music and the songs that Parsons wrote, but the two didn’t get on particularly well. Shortly after recording the band’s one and only album, ‘Safe At Home’, Parsons left to join The Byrds and the band broke up (‘Safe at Home’ was released posthumously). Parsons wrote two songs for The Byrds’ ‘Sweetheart of the Rodeo’ album and, originally, contributed lead vocals on three of the album’s tracks. But Hazlewood had taken Parsons departure from his record label personally and was not about to let him go easily. He took legal action against Parsons, for breaking his contract with LHI, and the outcome was that Parsons lead vocals were removed from the ‘Sweetheart of the Rodeo’ recordings and replaced by those of Roger McGuinn. This, in turn, would create a difficult situation within The Byrds and Parsons left the band not long after the album’s release. He then went on to form The Flying Burrito Brothers and create his own history. It could be argued that, without Hazlewood and his belief in the value of a different country sound, and without his court battle with Parsons, there would’ve been no Flying Burrito Brothers and no Gram & Emmylou. The country scene of the 1970s could’ve been a very different place.

Hazlewood moved to Sweden in the mid-1970s, after he stopped working with Nancy Sinatra. He continued to write and record even when diagnosed with terminal illness. His final recording was his 2006 album ‘Cake or Death’, he was a fan of Eddie Izzard and the album was named after one of the comedian’s routines.  Lee Hazlewood died, back in Henderson, Nevada, from Renal cancer in 2007.

In May 2017 Nancy and Lee’s recording of “Summer Wine” was used by fashion brand, H&M, as the theme to their “The Summer Shop 2017” ad campaign. The song immediately went to number 1 on the Billboard music chart. Nancy & Lee were always way ahead of their time.