The Cactus Brothers were a Nashville based band who released two excellent albums in the 1990s before folding. Those two albums, whilst critically lauded, suffered a fate familiar to many bands who dared to stray from the mainstream, namely they bombed. With radio exposure so vital in the US at that time, the Cactus Brothers were deemed to be too country for rock radio and too rock for country radio. After their second album they were dropped by Capitol EMI and the band disintegrated as members went off to do other things. 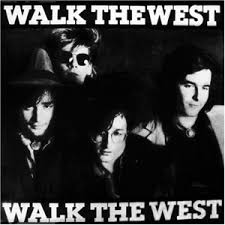 Paul Kirby, the main songwriter and singer in the band, was the son of songwriter Dave Kirby whose best-known song was ‘Is Anybody Going to San Antone’. Kirby senior was also a well-known country music session man and touring guitarist. Willie Nelson and Merle Haggard were regular visitors to the house and so Paul grew up steeped in country music. However, he was also interested in rock music and was greatly influenced by the way in which Nashville cowpunks Jason and The Scorchers married the two sounds together. Walk The West were founded on similar lines. Also in that band, and later the Cactus Brothers, were brothers John and Will Goleman, who were also the sons of songwriters, and a multi-instrumentalist who went by the splendid name of Tramp. Although others came and went, it was these four that formed the heart of the The Cactus Brothers. 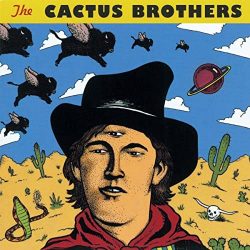 The Cactus Brothers self-titled first album was released in 1993. The album opens with a stomping version of Merle Travis’ ‘Sixteen Tons’, a country classic given the rock treatment. This, followed by ‘Crazy Heart’, probably their best-known song featured in the George Strait movie ‘Pure Country’. The song has much more of a traditional country feel with Will Goleman’s banjo to the fore. The two tracks preview the album as a whole as it intertwines a rough-edged rock sound with traditional country. ‘Devil Wind’ a fairly straightforward rock song sits alongside traditional folks tunes ‘Blackberry Blossom’ and ‘Fisher’s Hornpipe’. The Everly Brothers’ ‘The Price of Love’ is the album’s second cover song to receive the rock treatment. Ballads like ‘Our Love’ and ‘Sweet Old-Fashioned Girl’ further emphasise the band’s versatility. The energetic live favourite ‘Swimmin’ Hole’ is pure cowpunk, whilst ‘One More Night (With You)’ previews the more mellow country-rock sound of their second album.

With such an array of styles it’s perhaps unsurprising that radio schedulers didn’t know where to place them. Reviewing the album on its release The Los Angeles Times noted that “At a time when Nashville is offering pat, if often immensely popular, recycling of the polished ’70s Southern California rock sound epitomized by the Eagles…the Cactus Brothers album represents a far more adventurous and unpredictable approach to crossbreeding country and roots-rock” 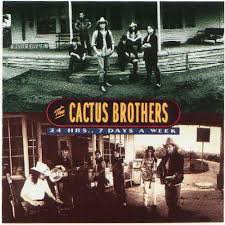 The band toured extensively in the USA and Europe, including an appearance at the 1994 Cambridge Folk Festival, earning themselves a reputation as a potent live act. By the time of the release of their second album in 1994 the band had undergone three changes in personnel, although the heartbeat of the band, Kirby, the Goleman brothers and Tramp remained. ’24 hrs. 7 Days a Week’ represented a shift to a more polished country-rock sound. Produced by Randy Scruggs, a seasoned country producer who had worked with Waylon Jennings and Emmylou Harris, it was still a great album. The songs were as strong as ever, but there was less of the eclectic variety of their debut. Nevertheless, opener ‘This Love’s Gonna Fly’, title track ’24 hrs. 7 Days a Week’, ‘Secret Language’, ‘Love Me Too’ and ‘Chains of Freedom’ are an impressive batch of Paul Kirby originals. Tramp chips in with the instrumental hoe down ‘Redhead’ which also represents a link to the folkier moments of the debut album. Once again the band supplement their own songs with some well chosen covers. Creedence’s ‘Lodi’, Red Simpson’s ‘Highway Patrol’, Lucinda Williams’ ‘He Never Got Enough Love’ and Bobby Edwards’ ‘You’re The Reason’ are played in the band’s own style whilst maintaining respect for the originals.

With commercial success still eluding them and their two album deal not extended, the Cactus Brothers ceased to function beyond 1995. Sadly, Paul Kirby died in 2011 aged just 48, following cardiac arrest. Although short-lived, the band left behind two very fine albums that have stood the test of time rather better than some of the tepid dross that their record company preferred to back, in preference to their more challenging approach.