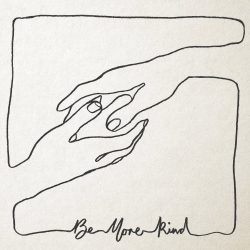 A lot of people think of Frank Turner as
‘the new Billy Bragg’. The thing the Hampshire-born songwriter mostly has in common with the aforementioned ‘Bard of Barking’ is that his idiosyncratic style marks him out as a musical Marmite: you either love him or hate him. There’s no middle ground with Turner, it seems. ‘Be More Kind’, his seventh studio album, is no different to its predecessors in many ways. These are songs with the importance of being earnest weighing heavily on their well-worn chord sequences and melodies. The lyrics, then, need to fly from the speakers and speak to the listener… when they do, all is well; especially on the the lilting title-track, with its lovely acoustic guitar figure and mournful strings. But, when the message is lumpen, the music carries all the gravitas of a Hallmark greetings card.

‘Make America Great Again’, for example, opens with an apology of sorts: “Well I know I’m just an ignorant Englishman, But I’d like to make America great again, So if you’ll forgive my accent and the cheek of it, Here’s some suggestions from the special relationship.” Dear me. Music’s truth and beauty exists in the intangible, what Bruce Springsteen calls the moment when “one and one makes three”. Turner it seems, over a decade into his career, will never understand that.

There are nice moments on ‘Be More Kind’ (hey, who can argue with the title, taken from a Clive James poem?), but the record reveals itself in the annoying riff and Mumford & Sons-style “oh oh oh” chant of ‘Little Changes’: in its attempt to be all things to everyone, there’s a danger the work will mean nothing to anyone.

The music is led by the artist’s need to stay relevant in world dominated by pop, but the changes to Turner’s popular sound have come at the expense of the grit his lyrics sadly lack. Sure, the likes of ‘Going Nowhere’ and ’21st Century Survival Blues’ are good songs, but they’re not good enough to be the stand-out tracks on a break-out album.

Back to the drawing board, then? Not really… a good look in the mirror is all Frank Turner needs. Then he can reflect back from the mountain so that all souls can see who he really is.