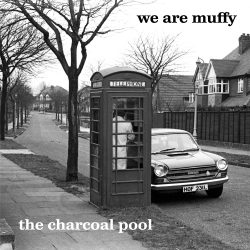 Listening to the distant Cornish trappings of We Are Muffy is like stepping into a time capsule of Brylcreem, pinstripes and windy seaside shingle. The listener is taken on a journey of random droll observations on urban Albion life, inspired by Nick Duffy and Angeline Morrison’s shared Birmingham past. It’s heavy to the point of comical on trombone, music box, bottle tops, broken china…the list goes on and serious traditional folk it may be, but there’s more than a cursory tip of the bowler hat to The Bonzo Dog Doo Dah Band and other eccentrics on the liberal wing of the sixties folk revival to be found here.

A particular idiosyncrasy about ‘The Charcoal Pool’ is in the way in which the song topics that fill the album such as ‘Frosted Candy’, ‘Unsuitable Shoes’ and ‘Milk Bar’– written about the end of a Birmingham bus route that took in a not-yet-finished Spaghetti Junction contrast with the gentle nature of the music. Recorded in Duffy’s garden studio, the sounds of the local birdlife have been integrated into the production. It’s as if Duffy and Morrison, in leaving Birmingham and then meeting and making music in the Cornish wilderness have made a conscious decision to contrast their former lives with their present on record.

They have attracted a certain amount of attention even being based out there in commercial musical isolation. Airplay comes via BBC Radio and summer brings slots at various festivals, admittedly nearly all of them small and in Cornwall. If you’re looking for something different, a little unorthodox perhaps, with a quirky sense of humour, reflective moods and traditional in spirit then look no further. We Are Muffy have released an album that reaches into the heart of industrial England, dissected and then reanalysed it from a completely different perspective and given it a musical soundtrack from another world.