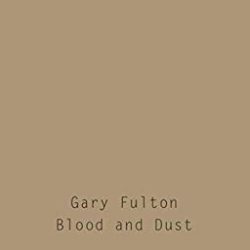 Having accidentally started playing the title track ‘Judas’ from Gary Fulton’s 2014 album of the same name on Spotify, the immediate thought was “ooh this reminds me a bit of Mercury Rev”, a catchy melody and some Rev-esque vocals, not quite as unique as Jonathan Donahue but heading the right way. Realising the error, fast forward five years to Cheshire-based Fulton’s sixth album ‘Blood and Dust’.

Album opener ‘Harbour Blues’ is certainly different to that earlier album. It’s loud and screeches into being with electric guitars and a strange Bob Dylan-Oasis type snarl. It settles into its rhythm, thankfully, but the percussion shakers feel quite intrusive at times and are quite distracting. The whole song has a sense of deja vu maybe taking melody or delivery from another but it was difficult to pinpoint.

There are some perky indie-rock tracks such as ‘Crooked Path’, ‘Showers Upon the Grass’ and ‘English Rain’, where Fulton could be labelled Britpop (though think more Lightning Seeds or Cast rather than Blur). These songs are quite light-hearted – ‘Showers Upon the Grass’ in particular has an incredibly catchy chorus – something that comes through in many of Fulton’s tracks.

In some ways, because there are such catchy lyrics (often repeated extensively) and Fulton’s vocals are sweet rather than strong, tracks often feel too simple, almost played for fun rather than with any gravitas. There are some instances where Fulton stumbles over the delivery as the lyrics ramble and trip themselves.

At the other end of the spectrum there are songs on this album that somehow entwine English (medieval?) folk themes with fast-paced story-telling. ‘Dance with the Devil’ feels like a ritual around a roaring fire, Fulton sings, “I raise my glass to past, present and future and I hope my luck never runs dry” as the backing brings in cowbells and pounding drums. ‘Burnin’ a Witch’ is a stripped back folk tune with acoustic guitar: “What’s the matter with you my dear, you just joined a long line of sinners?” sneers Fulton. On ‘Dreamweaver’ it feels like you have stumbled into a weird psychedelic cult. “I am the Dreamweaver, keeper of dreams for eternity” sings Fulton as he swirls off amongst sitars and violins. It’s upbeat and has a west-coast vibe.

It’s fair to say that this album is quite a mixed bag of styles which makes it difficult to love. Fulton is the king of earworm though. Still can’t get the “Dance, dance with the devil it shall be, I’ll dive headfirst into revelry” chorus out of my mind. Not sure that’s enough to propel this album into anyone’s favourite list though.

Odd mix of indie-folk/pop and devilry