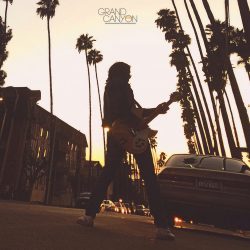 Be forewarned my friends… loading this album up on your player of choice will instantly reconfigure the technology of that device. Without any outwardly observable signs that changes are taking place, it will have been empowered with the capacities for both time travel and teleportation. You won’t realize any of this until you hit play and find yourself delivered to somewhere between Topanga Canyon and Chavez Ravine… sometime between 1978 and 1985.

From that vantage of time and place, you’ll be hard pressed to find any band who doesn’t blush and take it as a compliment when you compare their sound to the Heartbreakers or the L. A. Mafia. You won’t have any better luck looking for songwriters that bristle at comparisons to Tom Petty, Jackson Brown, or Warren Zevon.

But, at some point you will resurface in the year 2019 in whatever little corner of the world that you started out in. That’s when things might get a little bit tricky for you.

The album is loaded with well-written songs that are performed to perfection by a tight and talented band. One that is fronted by two skilled singers who, in turns, support and counter-point one another in interesting ways. The arrangements and production shoot for a sound that has been used to great effect by the best of the best , and they hit that target.

The combined effect does such an impressive job of paying homage to the giants of that bygone era in rock history that it becomes both the album’s most defining quality and its most troubling aspect at the same time.

To paraphrase Newton, you can see further when you’re standing on the shoulders of a giant. Yet, it’s worth noting that getting to the giant’s shoulders is a process that will likely involve being in the giant’s shadow at some times and at others, appearing to be ‘hanging on’ to said giant for dear life.

There is only one track on the album where the effort to scale the giant goes off the rails. ‘Theory of Everything’ is both lyrically and musically the weakest track on the album. It misses the mark on an emotional level. As such, it falls far enough short of the goal that it plays like a knock-off.

Songs like ‘Standing in the Shadows’, ‘Heaven’, and ‘I Don’t Wanna Wait’ are solid efforts but they don’t quite make it out of the shadow. They each sound a lot like somebody else who made really good music.

The tracks that stand out on this album are the ones that somehow manage to shrug off the comparisons and demand that the listener consider them on their own merits.

‘Lucinda’ opens the album up at arm’s length from the formula that unifies the tracks that follow. Muffled drums and halting guitar support mumble-y lyrics while tension builds. By the time the band pulls the trigger on the release, the listener is hooked.

‘Made in L.A.’ doesn’t deviate from the formula to raise itself out of the shadows. Instead, it hurls itself forward with such a sense of abandon that it stands out in any crowd.

‘Kansas City’ is another track that sticks to the formula even as it makes it all of the way to the giant’s shoulders. It fires on all cylinders. When front-man Casey Shea sings “Kansas City . . . only you can save me now” he offers the perfect metaphor for the album.

Getting out from under the weight of L.A. and out of the shadows of the giants is the best hope that the talented folks involved in this project will find the space to stretch their own legs and define their own sound. Anyone who wonders what Petty or Zevon would be putting out in 2019 should be hoping that Grand Canyon can find their footing.

If there is any group out there that can answer those questions convincingly… it’s them.

A glance backwards that wets the appetite for future offerings