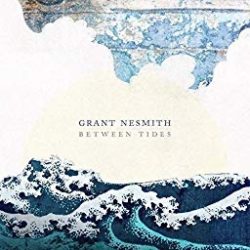 If the grey days of the UK in late January are getting you down then ‘Between Tides’, the debut solo album from Grant Nesmith, will conjure up basking on a beach with the sun relentlessly beating down. Before embarking on a solo career Nesmith was in a band (Ocean Forest) who described themselves as “psychedelic/surf”. On his own there is plenty of both. To Gram Parsons/Flying Burrito Brothers add Blue Rodeo and you are on Nesmith’s beach.

The obvious danger of a studio album described as psychedelic is that tracks can morph into each other. This is a feature of ‘Between Tides’ where the stronger tracks do submerge into their weaker neighbours.

But there is no denying Nesmith’s skills. This multi-instrumentalist from Myrtle Beach, NC, plays everything, apart from pedal steel, creating a sonic flow just like the waves. Opener ‘Gone so Fast’ starts with a gentle, simple guitar progression on to which he carefully floats vocals, rhythm and sprinkles drops of pedal steel.

Nesmith’s full psychedelia emerges with ‘Blue’. The layers start right at the beginning with percussion pushing his synthesised vocals to the surface. The result is a trippy effect that floats towards a mild prog rock. It is all very comforting.

At just over six minutes ‘Albatross’ glides along in a similarly languid way. Again, very pleasant, there is a lot going on, but after a while the the languor almost turns into torpor. Unfortunately sinking into this deeper state of relaxation does distract from his lyrics.

Overall Nesmith creates an addictively relaxed vibe. The result is most soothing but the record would benefit from slightly more variety. His lighter country rock could be a route worth pursuing in future releases.

Psychedelic surfing to the beach