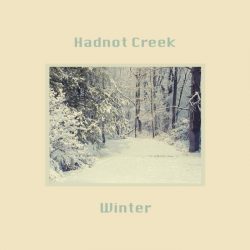 Hadnot Creek released ‘Winter’ back in February for those of you wondering why this bleak and desolate collection of spit and sawdust Americana appears on these pages to coincide with some of the hottest days in recent memory. We might be breaking out the strawberries and cream for Wimbledon over here but Cliff Richard this is not. Formed in 2016 by Charlottesville, Virginia’s self-confessed shoegazer Rober Sawrey, Hadnot Creek brings to mind windswept log cabins on lonely mountains. Opener ‘Everyone Is Guilty Of Something’ sets the mood. It’s not just the Cash-esque depths of Sawrey’s vocals, the whole vibe is lo-fi, the lyrics harsh and the guitars delightfully fuzz-boxed in the style of Beck or early Radiohead. Acoustic guitar also plays a large part on the album, you can feel the frostbite on tracks like ‘I’m Never Far Away’ as Sawrey uses his unique talent for melancholy to suck the listener into his Neverland of unrequited love and twist the powers of sonic interpretation to make the listener hear rather an unholy perversion. Oh, the power of a well-timed violin draw!

The Beck likeness comes through again on the track ‘Jesus Radio’, one of the more left of centre tracks on offer with its jazzy snare, slide and Wurlitzer keys while Virginia honoraries the Rolling Stones’ ‘No Expectations’ is faithfully renditioned. ‘Depression Blues’ and ironic thoughts turn to how here’s a guy who makes Nick Cave look cheerful as he reflects:  “Misery is your only friend/Visits you night and night again/Whispers into your ear/Claiming to be your next of kin” and its funny but sometimes hearing others ruminate on the sour side of life can give one a lift – the flock mentality. The album closes with the title track, Lucy Haden Smith’s ghostly backing vocals saturating the record in an ethereal, metaphorical blanket of winter snow.

Like a bag of old bones or a lonely dust-covered LP at the bottom of a garage sale nuanced with the clarity of a grain of dirt, this has been crafted such that it could be a hundred years old and would still trickle from your speakers like the crystal water from the North Carolina creek synonymous with the band’s name. Hadnot Creek’s ‘Winter’ is all you could ask for from contemporary Americana roots music because that’s just it, they make that word contemporary redundant – their music is that rare diamond. Timeless.