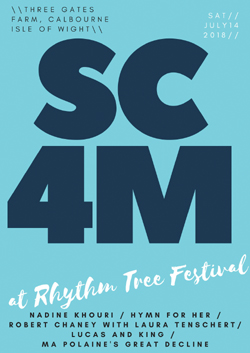 For nine years sc4m was held annually in Winchester’s Railway pub building up a reputation as one of the best and most intimate Americana/roots music festivals in the UK. This year sc4m relocates to the Isle of Wight linking up with the Rhythm Tree Festival. With their own Woodland stage sc4m will host their show as part of the main event on July 14th.  Over their nine years sc4m had an uncanny ability to spot acts who are now well known in their fledging years including Richmond Fontaine, John Murry and Chuck Prophet so it will be worth making the effort to catch this year’s line up in order that you can tell your grandkids in years to come, “I was there.”

This year’s line up includes Nadine Khouri whose latest album was produced by John Parish, best known for his work with PJ Harvey. Hymn For Her, an American duo who play “juiced-up backwoods country blues with a dose of desert rock psychedelia that has been described as “Hell’s Angels meets the Amish!” also appearing are Robert Chaney with Laura Tenschert, Lucas and King and Ma Polaine’s Great Decline. Here’s hoping the current summer heat lasts until then as it looks like a great day out.