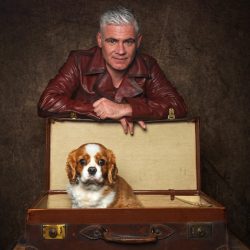 This is the debut Hegsy and The Elements album, a record where Mark Hegarty and his band tell and share movingly, with their audiences, stories that make you think and react. All the tracks were recorded at Shabbey Road Studios Cardiff and produced there by Al Steele. So, be prepared, to be taken down many interesting and unexpected roads. ‘Oh Sonni,’ the first track, is a captivating starter with Heulwen Thomas on violin providing, a foot-stomping background for the song of love for a son: “Oh Sonny, I’m by your side.”

The second track, in contrast, is a song, ‘Change You,’ which concentrates on the ending of a relationship and “The hardest thing I ever had to do” with the realisation that, “It’s time to move along.” And Hegsy’s voice rises mellifluously and impressively at the end of the song. ‘Giant – A Song for Patrick’ is a tribute to Hegsy’s cousin who died recently, and who is remembered for “the love you left behind.” Full sound, full voice. Moving, again!

To show how balanced the album is, listen to ‘Good Times,’ featuring another Cardiff singer, Gavin Sheppard who with Mark have a good rocking time: “Gonna have a good time tonight!”

‘Need to Know,’ with violin in the background is a statement of the feeling that remains after the end of a first relationship. The next track, ‘My Country’, is glorious, with Al Steele skilfully directing a full choral background provided by The Shabbey Road Male Voice Choir. Here is the musical centre of the album. With Hegsy’s voice in full control, two bars of a violin motif leading the music, and the Welsh landscape taking over, “The sunrise over mountains,” “Celtic mist from rivers,” one is left in awe and there is no surprise that “the passion burns inside.”

The anthemic nature of the record proceeds with ‘Rising Strong’ which continues the elucidation of life, and its appreciation, which is a characteristic of Mark’s songwriting. The story here is of a character who has lost his way, and “got things wrong,” but who now has turned a corner and is looking forward positively, and is rising again: “No more pain, no stories blame. /No hate. I‘m rising strong.” Razor-sharp lyrics here, reality biting, but also providing hope of an escape.

Mark is involved in playing for various charitable events in Wales and beyond, including Inhale, which raises funds for the Cardiff and Vale hospitals. He has also arranged concerts to raise the profile of cystic fibrosis. And another cause that Mark is part of is Parental Alienation Awareness. In April this year he marched to Downing Street where he sang ‘Slave to Fortune’ from this album: supported by The Louise Ryan Vocal School, he movingly relates the words of a dad who misses his daughter: “I miss being your dad…are you doing well in school?… I think about you every day…”

The theme is continued on ‘The Apple of My Eye’ where a father, looking at “The space at the table waiting there for you,” lives in hope that “the mist will disappear,” and “we’ll be a family again.” It is not often that a theme such as this is portrayed so meaningfully.

The varied collection ends perfectly with ‘This Moment’s Ours’: uptempo, gulls in the background. Perfect. What carries you throughout this album is Mark’s melodic voice and the outstanding quality of the production.