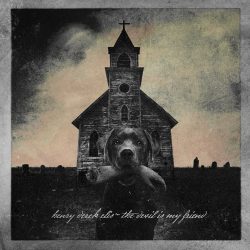 Henry Elis is a stalwart of the Los Angeles metal scene, fronting many bands over the years, and currently lead vocalist for the trash metal supergroup “Act of Defiance“, which was formed by ex-Megadeth memebers  Chris Broderick and Shawn Drover. Within the context of this background, the theatricality of “The Devil Is My Friend” starts to make sense. Clearly strongly influenced by heavier genres, Elis is pushing his own brand of dark ‘southern gothic americana’. We are invited into a strange world filled with creepy characters, suspect motivations, and all that this entails.

As is sadly often the case with conceptually-led music, the album starts to feel stale quite quickly. The effort to sell the theme makes the songs feel overwrought. Elis’s vocals, which fit wonderfully with the heavy sound of “Act of Defiance” feel a little out of place, and even a little forced. The whole thing feels a bit too much like an act, and whilst this is not necessarily a bad thing with this kind of project, it just doesn’t quite come off.

All this being said, there is still much to enjoy on the record. The musical calibre of everyone involved is undoubtable, and there’s a lot of fun riffs knocking around. The sixth track “Corpse Carver” joyously abandons the ‘southern gothic’ pretence and comes alive with some aggressive guitar thrashing and nicely over the top lead. The final track, “Graveyard Country Blues“, does something similar, descending into a three minute maelstrom of wailing and thrashing and bashing. These two tracks stand out as a more genuine expression of Elis’s artistry than the rest of the record, and are accordingly far more enjoyable to listen to.

Doing conceptual side-projects is somewhat of hobby for musicians of all kinds, and viewed as such “The Devil Is My Friend” has some merit – it certainly delivers on its promise of dark themes and creepy atmosphere – but it all feels a little over done. It’s a record which needs to get out of its own way, really shining on the few tracks that sound like everyone was just having fun, rather than worrying about making it sound a certain way.

Overall, “The Devil Is My Friend” is half-decent, and peppered with some great tracks. If these had been built on, it could have been a kick-ass thrash album, but the toned down energy and thematic preoccupation make it a bit too one-note to make much of an impact.