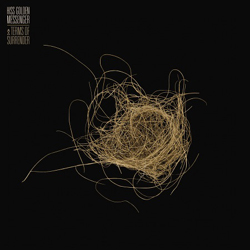 M. C. Taylor’s shape shifting collective, Hiss Golden Messenger, is very like a ship whose course is set by its captain’s moods and emotions. Pre release talk of Terms Of Surrender being, “Taylor’s journey through a tumultuous year of trauma and psychological darkness, hoping and working towards redemption and healing, and the conflicting draw of home and movement,” perhaps led some to expect a dark and brooding work. It’s true that there are moments here when Taylor is addressing some meaty issues (and that’s not something he’s shied away from before) but the album’s voyage is at time glorious with Taylor’s winning combination of glistening folk, rock, blues and soul engaging from start to finish.

There’s an open letter from Taylor to his fans where he sets out some of his issues from the past year – the grind of touring, separation from family and a fog of depression – while stating that writing these songs were, in some way, his salvation. It’s a stark reminder, especially given the plethora of untimely deaths which have occurred amongst musicians recently, that the guys who turn up to entertain you on a night have schlepped and sacrificed to be there, often for little return. It’s perhaps plainest to see here on Taylor’s song for his daughter, ‘Happy Birthday Baby‘, sung as if he were writing a letter to be read much later. “When you think of me, think better than I think of myself,” he solemnly asks. The opening track, ‘I Need A Teacher‘, despite surfing on a glorious swell of burbling and clamorous guitars, finds him seeking a guru, someone to lead the way while the forlorn ‘Down At The Uptown‘ is like his tour diary set to music.

The album has its share of light and shade. ‘Bright Direction (You’re a Dark Star Now)‘ is a lovely low key number with some Al Kooper like organ and ‘My Wing‘ pulses with clarion guitar and Dylan like harmonica flourishes while ‘Katy (You Don’t Have to Be Good Yet)’ is a soulful whirl with gospel voices allowing Taylor to sound at times like Birds Of Chicago. But then he can dive into the spectral junkyard blues of ‘Whip‘ and the Dr. John like creep of ‘Old Enough to Wonder Why (East Side—West Side)‘ with equal aplomb. The album closes with the spare arrangement of the title song with Taylor able to step away from the abyss he was teetering on for a while.

Overall, Terms Of Surrender finds Taylor pursuing the musical direction of Hiss Golden Messenger but allowing a little bit more of himself to peek through the admittedly, excellent, sonic curtain.

Modern Cosmic Americana born of despair and suffused with hope