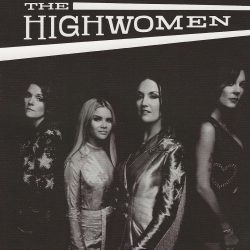 The Highwomen are Country music’s latest “supergroup”. Comprising Brandi Carlile, Natalie Henby, Maren Morris and Amanda Shires the group came out of an idea from Shires to form an all-women group as a homage to the legendary Highwaymen (Johnny Cash, Willie Nelson, Waylon Jennings and Kris Kristofferson) but also as a means to promote female artists on Country radio stations and at music festivals. The band claims to have been influenced, in part, by the Me Too movement and is aiming to raise awareness of female artists in the country genre in particular and in music in general. All lofty and worthwhile aims but do the band live up to the “supergroup” tag and will their music make the radio stations pay attention? On the evidence of this, their first album as a band, the answer has to be a, slightly qualified, yes.
‘The Highwomen’ is a slick, well-produced and well-delivered album. Kicking off with the title track, ‘The Highwomen’ is a re-write of Jimmy Webb’s ‘The Highwayman’. Working with Webb, Carlile and Shires restructured the lyrics to include references to an Immigrant Mother, a “Witch” (Healer), a Civil Rights activist and a pioneering Preacher. It’s a clever counterpoint to the original song, taking away the macho preening of the male version and recognising that women’s contributions to society are often subtler and all the more effective for that subtlety. As with the original version, each member of the band takes an individual verse with the voices coming together on chorus sections. This is interesting because the four singers that make up The Highwomen do not have the same immediately identifiable voices of the Highwaymen. When the voices come together the harmonies are superb – these women can really sing – but the individual voices can be hard to identify on some of the songs. This can be irritating when they insist on sharing lead vocals throughout most of the songs – all very democratic, but it doesn’t always serve the song in the best way.

This is an album that celebrates women while trying to point out that the stereotypes are just that. The lead single from the album, ‘Redesigning Women’, is particularly aimed at those who would put women into narrowly defined roles – “Pulling up the floors and changing out the curtains, some of us are saints and some of us are surgeons. Made in God’s image, just a better version and breaking every Jell-O mold”. The writing throughout the album is particularly strong – this is to be expected when you consider that, individually, these artists have all won recognition for their writing but, working together, they’re really pushing the boundaries for country songs. Perhaps the best example of this is the Shires/Carlile collaboration (co-written with Jason Isbell and Chris Thompkins) on ‘If She Ever Leaves Me’, which they have described as “the first gay country song” – “If she ever leaves me it’s gonna be for a woman with more time; who’s not afraid to let her dreams come true. If she ever gives her careful heart to somebody new, well, it won’t be for a cowboy like you”.

It’s good to see artists like this exploring new ground and a different approach. Morris and Carlile are both well-established solo artists, so it’s enjoyable to hear them working in a collaborative setting like this. Shires and Henby are more regularly in the background, Shires working with husband Jason Isbell and Henby as a writer for artists like Miranda Lambert and Toby Keith, among others, so it’s good to see and hear them get a little more individual exposure. Amanda Shires’ fiddle playing, in particular, gets more recognition in The Highwomen than it does in Isbell’s 400 Unit and deservedly so.

Sadly, they opted not to include their barnstorming version of Fleetwood Mac’s ‘The Chain’, which was recorded for the soundtrack of the movie “The Kitchen” and which really makes the hairs on the back of the neck stand up; and the insert with the CD uses very small grey print on a grey background, making it virtually impossible to see who did what on each of the tracks. Outside of that criticism this really is a very enjoyable album. What will be most interesting is to see what they do next. Can they keep the momentum going and can they produce a second album as strong as this first one? The Highwomen are an accomplished group of singers and songwriters with a lot to say and, on this first album, finding a very impressive way to say it, while clearly having a good time in the process.

This could be the start of something very big!

The Highwomen take the high road