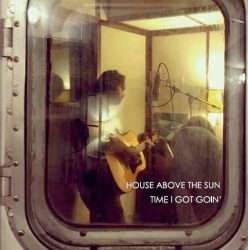 The London five piece’s second EP release opens with the glorious, propulsive ‘Trains’. Hanging on a repeated guitar phrase the song is brimming with ideas and excitement from the layered West Coast sound through to the delightful harmonies and breezy vocals – think The Fernweh or even Gerry Rafferty and you’ll be in the right ballpark. Marvellously upbeat and optimistic in tone and feel.

‘Small Town’ follows, similarly drenched in exquisite guitar and production, but a simpler song as the narrative unfolds and the steel guitar colours the honeyed harmonies. It is to a certain extent Americana by numbers but done in such a delightful way that small quibbles about originality seem churlish.

Title track ‘Time I Got Goin’ is more in the ramblin’ troubadour mode as the production levels of the previous songs is pared back to essential splashes of colour as the song develops. It is a measure of the songwriting that when the production kicks in with (synthesised?) strings towards the end it feels a tad overdone. ‘The Bitter Life of Little Tony Starfish’ is far more intriguing and not just the title. Opening with a fuzzed vocal the song is a psychedelic stab that the previous songs have not really hinted at; there are hints of Gary Louris here in the song writer – instant hooks, ear worm harmonies and some arresting instrumentation. This is the highlight of the EP, a great almost Dukes of Stratosphere like confection. Magic

Final song ‘Footsteps’ returns to the vibe of earlier tracks as a neat conclusion to a very good EP. More please.