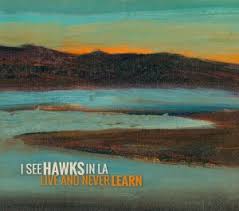 How many bands have suffered the “sounds like the Eagles” curse? Even if being mentioned in the same breath surely means they must be onto something good, attempting to match the songwriting and vocal skills of Messrs Henley and Frey is surely an invidious task and is doomed to suffer by comparison. ‘Live and Never Learn,’ the first album in five years from I See Hawks in L.A., certainly has that early Eagles country rock feel running through the core of its 14 tracks. The title track offers up a microcosm of what is to come, rhythmic, mid-paced tempo, reverby Telecaster and easy on the ear. The quality of musicianship is spot on throughout the album and much credit for that must go to five-times Grammy-winning mixer Alfonso Rodenas.

Most songs have been written by the combination of band members Paul Lacques, who also produced, and Rob Waller, with many of the songs a direct reflection of the personal angst that the band have lived through over the last few years. Using trouble and strife as inspiration for songwriting is a staple of course but The Hawks have the knack of using subtle humour to mitigate some difficult subject matters. For an example look no further than the unique and distinctive ‘My Parka Saved Me’ which features drummer Victoria Jacobs narrating the true story of a car crash she suffered as a teenager when it was only the thickness of her coat that saved her from the glass.

‘The Last Man in Tujunga’ tells the tale of a breakup unfolding over a mobile phone call as the flames of a Californian wildfire inch ever closer. There is more than a touch of Mike Nesmith in the vocals here and, again, the subject matter is made even more poignant by band member Paul Marshall’s own recent experience of having to evacuate his Tujunga home during the fires of 2017.

On an album full of great sounding tracks it is two songs that were co-written with Peter Davies of the UK’s Good Intentions that really stand out and showcase that Eagles sound at its best. ‘White Cross’ and ‘Singing in The Wind’ have the Hawks’ trademark intelligent and clever lyrics, great melodies and harmonies. That said, it would be unfair to label the Hawks as a simple Eagles soundalike band. There are boogies, ‘King of The Rosemead Boogie,’ the traditional sounding country of ‘Poour Me’ and ‘The Isolation Mountains,’ as well as the folksy and dreamlike ‘Spinning’.

Comparisons with musical greats can be unfair and unhelpful but I See Hawks in L.A. have succeeded in recording an album that both showcases their own distinctive musical talents whilst, whether by design or accident, tapping into some of the heart and soul of 70’s California. And that is no bad thing.

70s California brought to life and updated by the talented Hawks of L.A.