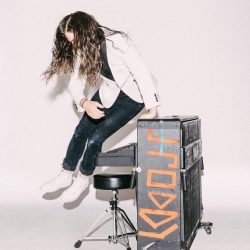 Despite a passing resemblance to The Kings of Leon, Walston and his cohorts lay down a high-energy rollicking version of rock and roll. An unabashed, unashamed assault, always pushing melodies to the front, the guitars always moving forwards, the vocals a tuneful yelp – it’s a vinyl version of poppers. You Know Me Better or Numbers both rush out of the blocks like an untamed bronco, wrestled by Walton’s vocals into a bucking rousing beast of a song.

Walston always manages to find a chorus with about three hooks in it. It isn’t subtle, it’s music for punching the air to. Well most of it is, an excursion into ballad territory with a skittering pulse and sans electric guitars (for the most part) is less successful. The Wanting sounds big enough for any stadium, cannily building with echoes of U2 and Huey Lewis – triangulate them with the aforementioned Kings of Leon and you’ll be in the right car park. The closing Burn Black does manage to make peace with mid-tempo, waves of melody and a circling riff play off against each other and the result is as satisfying as the fist-pumping.

This rock is on fire