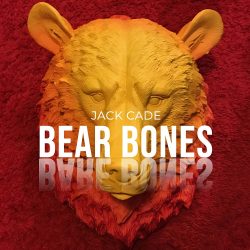 Jack Cade will never be accused of having a golden throat. Imagine Kris Kristofferson in a heated argument with Tom Waits, Captain Beefheart, and Johnny Cash. If it helps, or just for fun, picture the gigantic yellow bear head that graces the cover of his second solo album, ‘Bear Bones,’ as the singer of the songs within. Once you get it, though, you’ll be glad you stuck around, because ‘Bear Bones’ is one captivating listen.

With his group, the Everyday Sinners, Cade released two albums of Americana, folk, and country accented by heavily distorted guitars, bleak lyrics, and the occasional WTF moment (check the Waits-like ‘Dead Weight Walkin” off their second, ‘Lord of the Empty Manor’ for a brilliant example of the latter). In 2016, he released his first solo album, the mostly acoustic – and even more bleak – ‘A Murder of Crows.’ With ‘Bear Bones’ however, things seem to be looking up, at least musically.

Highlights include the haunting ‘Dust,’ with Cade directly channeling the Man in Black; the ‘Darkness on the Edge of Town’-era Springsteen-esque, ‘She Got Something to Say,’ powered by organ and piercing electric guitar and a fantastic hook; and the rock-fueled closer, ‘Stripped’ (its chorus gives the album its title).

‘Bare Bones’ is not so much a departure for Cade as it is an evolution. He’s learned to channel the dark and acoustic tones of his earlier work into a more accessible sound, yet it remains raw and powerful. By making many of these songs rock-based and hook-heavy (and the songs stay with you long after the album’s over), Cade has guaranteed his music will reach a wider audience without compromise – every artist’s ultimate dream.