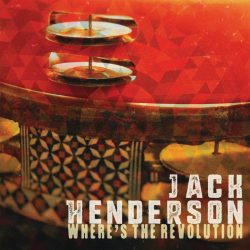 aking a high-quality record is an expensive business at the best of times and in these challenging days, it seems that more and more artists are having to dig deep into their musical bag of tricks and do much of the heavy lifting on their own and Jack Henderson, with his newest album, ‘Where’s the Revolution’ has certainly done that. Self-recorded outside Henderson’s hometown of Glasgow, the ten-track release sees the UK singer-songwriter, producer and multi-instrumentalist on inspired creative form to deliver a solo album in its truest sense. Of making the record, Henderson says:

“If necessity is the mother of invention then Where’s The Revolution is largely the result of that confluence of necessity and invention. Sometimes limitations can be liberating and for this album I wanted to explore what would happen if I recorded, produced and more or less played everything myself whilst embracing those limitations, both physical and financial, head-on. There was no overarching manifesto and I wanted to let the songs dictate their own course and allow the imposed imperfections to constitute the very soul of the record.”

Those of you familiar with Henderson’s work will know he has a solid pedigree and during the last 20 years, he has toured extensively in Europe, Australia and the US and appeared with such luminaries as the Cowboy Junkies, Buddy Miller and Sarah McLachlan.  Here on ‘Where’s the Revolution’ though, he doesn’t need any help on what is an excellent album.  Henderson’s music doesn’t fall neatly into the classic Americana genre with blues/jazz vibe on both ‘Hey Batman’ and ‘Don’t Drink The Water’ before moving effortlessly back into more mainstream Americana territory with what may well be the best track on the album, ‘Next Time I Meet You’ with vocals and phrasing reminiscent of both Michael McDermott and Frankie Miller while being distinctive enough to never stray even close to simply sounding like a copy of those two greats.

A few lines from the title track ‘Where’s The Revolution’ sums up the mood and tone of this album “Reckless disaffection, Constant disconnection, Squeeze you till you’re almost sick, We don’t have to take this shit, Oh my dear, where’s the revolution now” and if like Jack Henderson you are struggling with the inequalities and lack of societal change brought about by greed and political oppression, then this is an album for you.

Turn down the lights, turn up the music and let this fine album soak in