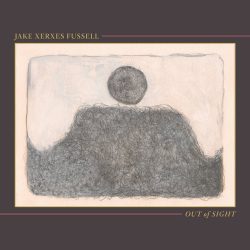 There are nine tracks on North Carolina folk musician  Jake Xerxes Fussell’s third album, ‘Out of Sight’, and in the sleeve notes meticulously explaining each one’s backstory, one adjective appears in all of them: traditional. But it’d be very wrong to assume that ‘Out of Sight’ simply picks up from where Fussell left off on his first two albums,  also made up entirely of  re-worked and often long-forgotten folk songs. That said, on his latest album, Fussell unearths songs from locations as diverse as County Offaly in Ireland, North Carolina, New Jersey, Florida and the Chattahoochee River separating Alabama from Georgia.

The music itself is richly varied in content, ranging from murder ballads to cautionary moral tales to dance tunes to rural blues. But the most strikingly unusual is surely the album-opener, ‘The River St. Johns’. This is based on an archive recording of one Reverend Harden Stuckey from Jacksonville in the 1930s, reproducing an anonymous Florida fishmonger’s turn-of-the-century sales pitch: “I’ve got fresh fish this morning, ladies / They are gilded with gold, and you may find a diamond in their mouths”. Not many of those to the pound, for sure.

Initially, such wide-ranging, often obscure and occasionally downright improbable source material for the nine tracks on ‘Out of Sight’  feels oddly like having nine free tokens for a musical Lucky Dip. The good news being, when you brush away the wooden shavings and open the wrappings, there’s anything but duff presents inside.

Instead, ‘The River St. Johns’ and its loping mid-pace ballad of an invitation to, erm, buy fish, pitches you headfirst into the deep end of 41 minutes of finely honed, blue collar traditional folk boosted by restrained-yet-rockier edges. In the process, ‘Out of Sight’ manages to be both easy on the ear and foot-tappingly melodic. But there’s also a kind of deeper sub-layer to each song that shines through the homespun imagery and that you know will keeping nagging until you go back to hear out each track more intently. As Willy Nelson once said about 1970s Outlaw Country, here “there’s room to listen, and room to dance.”

‘Out of Sight’  is the first time Fussell’s used a full band, complete with a mixture of electric and acoustic instruments, exploiting the extra backing to tease out those deeper layers of interpretation. It helps enormously that he’s got a warmhearted, rough-edged voice that strikes the right note time after time, in songs that veer from gentle laments on the folly of marrying for money [‘Michael was Hearty’] to the more boisterous dance tune, ‘Drinking of the Wine’.

‘Out of Sight’ certainly doesn’t feel – as a few people might worry – like a hipster-esque exercise in dusting down weird vintage music to wow the craft-beer crowd. Rather, listening to folk-rock as  stunningly good and meticulously curated as this  – the kind that walks the invisible tightrope between staying faithful to original material and sounding  bang-up-to-date with such dexterity you barely notice how it’s done – it’s hard not to find echoes of giants of the genre, like, say, Fairport Convention in the late 1960s.

Sure, no Sandy Denny on vocals and no original compositions make for two key, obvious differences between this and Fairport Convention of that era. But when it comes to the superficially effortless and hypnotic beauty stakes, the guitar playing on ‘Out of Sight’ would arguably even give a youthful Richard Thompson a reasonable run for his money.

Above all, when it comes to Fairport Convention’s mission of making folk music accessible and interesting to all kinds of modern audiences, ‘Out of Sight’ has it nailed as well – to the point where for all their age, its  nine tracks sound just as fresh and shining as those  fish out of the River St. Johns. Which is far easier said (or sung) than done.

More than an excellent folk music revival, a powerful renewal