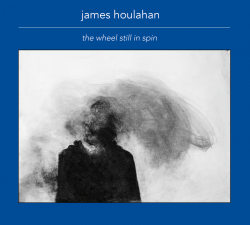 The “wagon-wheel effect” is an optical illusion where a wheel appears to be turning backward when, in fact, it is in forward motion.  Science journals argue over its cause, but some attribute the phenomenon – other than when caught in 24 frames – to a theory of perceptual rivalry when there are two different interpretations of the same scene by the brain.

It’s not fully clear if this effect was on the mind of Los Angeles-based singer-songwriter James Houlahan when he was crafting his fourth album, ‘The Wheel Still in Spin,’ but the songs that make up the effort seem to all point to motion of some kind – be it backward, forward, lateral, or back again.

‘Wheel’ was recorded with producer Fernando Perdomo handling bass and keys, along with Danny Frankel – a veteran of sessions by Lou Reed, Fiona Apple, and Nels Cline, among others – on drums.  Houlahan contributes guitar and harmonica throughout, and his partner, Esther Clark, also contributes backing vocals on most of the album.  Linda Perhacs (whose 1970 classic, ‘Parallelograms,’ still influences singer-songwriters to this day, including Houlahan) lends her psych-folk power to the Zeppelin-like ‘Spirit/Music’ – which she co-wrote along with Houlahan, based on a poem by Gregory Corso – acting the part of Sandy Denny as the track recalls the droning trance-like beauty of ‘The Battle of Evermore.’

Houlahan’s vocals often recall the tonality and slight rasp of Marc Cohn’s, while the music on ‘Wheels’ remains in a mostly nocturnal state, perfect for late nights to early dawns on long stretches of highway as the mile markers drift by.  Houlahan’s acoustic guitar dominates, but on ‘Faded’ – the best song on the album and a modern-day classic – his lead electric playing is transcendental, reminiscent of ‘While My Guitar Gently Weeps’-era Clapton.  The song’s haunting melody and sparse arrangement allow plenty of space for his masterful six-string work to shine.

Highlights abound throughout ‘Wheels,’ including the wistful, assuring opening track, ‘Let it Go,’ the dreamy pop of ‘Memories of Outer Space,’ heightened by Houlahan and Perdomo’s use of glockenspiel and Fender Rhodes as they drive the melody, and ‘Stuck in Between,’ where Houlahan’s phrasing could remind one of Jakob Dylan.

The wide-open terrain of Texas unexpectedly plays a role throughout the album as well.  Houlahan covers honky-tonk rocker Joe Ely’s classic ‘Indian Cowboy,’ but filters it through a Tom Waits-circa-‘Swordfishtrombones’ carnival of sound guided by Frankel’s glorious percussion.  The plain-spoken ‘All I’ve Got’ along with the aforementioned ‘Let it Go’ recall the heyday of ‘70s Texas troubadours.

‘Wheels’ does have its imperfections.  The early placement of the dreamlike, hypnotic ‘Spirit/Music’ as the second track slows the pacing a bit.  ‘Father Song’ is an experiment that seems to have lost the plot, and quite frankly, listening to the repetitive ‘Talking to the Road’ is a test of one’s endurance.  If you make it through that, however, you’ll be rewarded with the sublime, album-closing ‘California,’ with Houlahan showcasing a truly Kristoffersonian delivery, complete with a beautiful harmonica lead. It ends the album on a definite high note.

‘The Wheel Still in Spin’ is an album that warrants repeated listening, and will hopefully expose James Houlahan to a broader audience hungry for adventurous folk music – grounded, yet brave enough to wade into the deep end of experimentation.