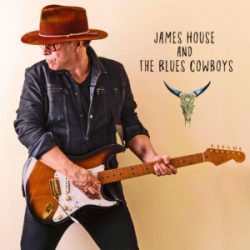 es House is a successful country blues artist who many people won’t be familiar with. Having spent much of his long career writing hits for others, House has rarely been the main focus of attention in his own right despite the fact this guy can really play the guitar and deliver soulful blues tinged vocals. On first listen to this record similarities with the late great Stevie Ray Vaughan and Joe Bonamassa abound – and closer investigation reveals that House has co-written many of the songs that grace the latter artist’s recent release.

So this guy has pedigree and on this – his third full length album – you get a sense that his coming of age as a recording artist is now. House has written or co-written the eleven tracks on this self-produced record which keeps the tempo up from first to last. The opener ‘Jail House Blues’ features a great B3 organ played by House which is followed by ‘Arkansas Woman,’ a real down home piece with duelling guitars, whilst ‘Boomerang’ is a lively track about an on-off love affair.  The one song for which a professionally produced video is available is the album closer ‘Which Side Of The River’ – readily available to view online. This is a great track that not only has a good groove and feeling but a message to boot and is a good advert for the style and feel of the record as a whole.  The list of players on the album includes many guitar luminaries, one of the best being Will Kimbrough whose talents would grace any record – and whilst it may not appeal to blues purists it is a great advert for the country-tinged variety.

A top dose of country blues from veteran Nashville based artist