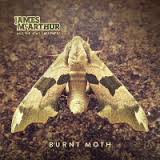 “Burnt Moth” is the second album from James McArthur, former drummer for Paul Weller’s touring band. It follows his well received “Strange Readings from the Weather Station”. And it is more of the same. This is a pastoral, proggy folk dappled with some beautiful embellishments in the form of some excellent strings and restrained melodies. It comes as no surprise that Joey Magill of Syd Arthur (the current riders of the crest of the prog mini revival) is in the very small roster of musicians that play on this interesting and sometimes arresting album. The album opens with 14 seconds and What The Day Holds, both reminiscent of Grantchester Meadows Floyd with strings to the fore on a bed of acoustic guitar and whispered vocals.

So we progress through a watercolour of varied pastels of the same colour. Some with piano bedding the strings (To Do) others with some deft finger picking (Bluest Stone). The template becomes the overwhelming flavour. A beautiful picture but all one colour!

Evens on the Green lifts the mood with a fuller production but we soon slip back into a stoned haze of gentility and gossamer, cobwebby delicacy.  A marvelous album for lying by a meandering river drawing on a fat one whilst thinking about nothing in particular.