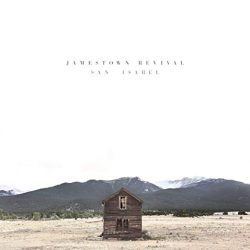 This glorious album opens with the strident and harmony-drenched ‘Crazy World (Judgement Day)’, a snapshot of the album’s themes and indeed musical muscle – driving banjos, Hammond organ and stomping chords. Ostensibly an acoustic album the Jamestown Revival’s close harmonies are in full evidence with their hints of The Avett Brothers, Simon and Garfunkel and even The Everlys.

‘This Too Shall Pass’ is perhaps the closest example of their debt to Paul Simon, a delightful upbeat shuffle with a killer chorus. ‘Killing You, Killing Me’ follows, far more melancholic and sultry, a drifting lament with single picked guitar accompaniment. The vocal mix is fabulous, completely upfront and crystal clear.

‘Something That You Know’ is a full band sound that slips into the ether on a lazy, soulful beat. Electric guitar sends shards of colour that cut through the soaring vocals and the wide open spaces and sunsets beckon. Magical stuff. Further into the album the Mamas and Papas classic ‘California Dreaming’ gets a reworking. Dangerous stuff tinkering with a standard but it is tastefully done. So respectfully, in fact, that one wonders the point other than they liked the track.

The album closes with another full band soundtrack ‘Winter’s Lament’ and again this is where the Jamestown Revival really excel. A gorgeous ballad with subtle musical splashes and an aching sense of place and melancholy that just lulls the listener as it gently unfolds.