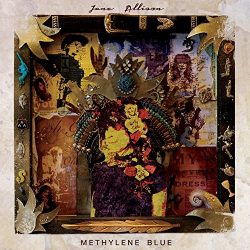 Just occasionally, an album comes along where almost from the first note the music just reaches out, wraps itself around you and reaches deep into your very soul. With her second album, Methylene Blue, Aberystwyth born Jane Allison takes the foundations laid down in her earlier music and has crafted an album of unexpected maturity and simple beauty that enchants and delights from start to finish.

The opening few country-tinged bars of the upbeat first track, Ain’t Wreckin’ Me, fool you into thinking that this is a nice but probably somewhat lightweight ditty. That notion is instantly dispelled as soon as Allison, with some biting lyrics, sings about a relationship that was destined for failure from the very outset, “on that night on our honeymoon, first you made me cry, then you made me swoon, Jekyll, you’re just a Hyde away” with the rest of track being an equally withering account of a romance doomed to failure.

If the first track nods its head slightly towards country, then the rest of the album with its artful blend of the mournful, moody atmospheric darkness on tracks like ‘Another Prayer’, cleverly wends its way through a wide gamut of human emotion but the whole album is held together by Allison’s incisive lyrics and a vocal dexterity that ranges from the delightfully melodic ‘Oh Girl’ to the driving rhythms of the outstanding title track ‘Methylene Blue’.

Trying to pin a genre on this album is all but impossible.  It manages to seamlessly blend Country, Celtic folk and Americana with Allison’s roots as vocalist with Indie band KarmaDeva still managing to peep through from time to time. Helped by fine production and mixing by Alonza Bevan, and some low key but excellent backing vocals provided by Audrey Evans (Mediaeval Baebes), this is a truly captivating record of the highest quality.  Track this down, hand over some money – you won’t be disappointed.

A real gem. Seek it out!