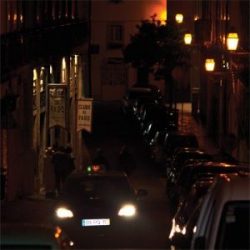 The question which will be asked by future generations will be “What did you do during the pandemic of 2020?”.  Which most of us will be able to reply that we gained weight, tried to make sense of it all and found a way to cope in the altered landscape created by COVID-19.  Jeff Kelly found that like many of us he needed to adapt his plans.  Rather than wallowing in misery, he channelled his energies into creating and releasing ‘When The World Was Younger’ showcasing his love of Spanish and Portuguese culture.

Kelly is a prolific musician who has been writing and recording music initially in a band called The Green Pajamas in 1984 but for many years now also under his own name or in collaboration with other artists.  He self produces his music allowing him to have complete autonomy in creating the 35 plus albums he has written and performed on.

The music on this release is influenced by his love of Portugal and Spain which provides a basis for the songs and overall feel of the album.  There are 4 new songs and recordings of previously released music all of which was recorded at his home.  The songs are a love letter to the countries and their cultures including ‘Cristina Dancing’ which he wrote in tribute to a Flamenco dancer Cristina Hoyos.

‘Of Missingness’ could have been written by Leonard Cohen evoking both a sadness for something which might have been and the realisation that it was never to be.  ‘Only Endless Tomorrows’ unfolds similarly with Kelly singing/speaking the lyrics  “Why do I feel like the winter when its the middle of May.” which could have been written by Mr Cohen himself.   ‘Juliana of the one-man-scanner station’ is a lovely piano-led pop song which would fit in very nicely alongside the Fountains of Wayne.  Generally the music invites you into waltz along combining traditional folk-based structures with the added touch of Spanish flamenco music.

Kelly has said that he hopes that this album “is a little bit of something to help momentarily distract the senses, heal the heavy heart and uplift the spirit.”.  In trying to find his own way through these troubling times he has done just that for himself and anyone wishing to find a musically soothing escape from our daily reality.