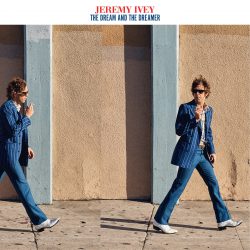 Jeremy Ivey is probably best known to most Americana followers as the guitarist in Margo Price’s band and indeed, her husband of eleven years. The pair formerly worked together in the country-rock band Buffalo Clover. With only limited commercial success, Ivey decided to take a back seat and to back his wife’s career as a solo artist. In 2015 the couple sold or pawned many of their possessions (including Price’s wedding ring) to buy studio time to record Price’s debut album ‘Midwest Farmer’s Daughter’ and the rest, as they say, is history.

Ivey has always contributed lyrics as well as instrumentation, to his wife’s work. He is in fact, quite a prolific writer. The release of ‘The Dream and the Dreamer’ his own debut solo album sees Ivey step out of his wife’s shadow to showcase his own talents. Recorded in a small house studio in Nashville and produced by wife Margo Price, who also provides some backing vocals, the record has a fresh homespun feel to it. Ivey very much takes a lyrical approach, his subtle guitar licks largely playing a supporting role. Listing Bob Dylan, Neil Young and Leonard Cohen amongst his influences, Ivey’s record has the feel of a suppressed songwriter liberated. Themes range from the political and the environmental to the more personal and introspective. Opening track Diamonds Back to Coal’ highlights how in the current news environment that we see on our screens normalises what is often “so beyond bizarre, it’s surreal”. Whereas the more personal ‘Story of a Fish’ relates to Ivey’s adoptive upbringing and his subsequent life journey. Ivey is equally eloquent writing about his own feelings and experiences or reflecting on wider and bigger issues.

Throughout the album, Ivey’s excellent songcraft dominates. The musical settings are varied with rock, country and folk stylings. The songs are given beautiful, light touch accompaniments with voice and lyrics to the fore, even on the more up-tempo songs. It could be argued that the quality of Ivey’s voice doesn’t always match that of his songs, a longstanding criticism that hasn’t done his hero Bob Dylan too much damage. The counter-argument is that far from detracting from the songs, Ivey’s voice gives them an earthy honesty.

Having parked his own ambitions to selflessly give full support to his wife’s career ‘The Dream and the Dreamer’ announces Jeremy Ivey as a serious songwriter and artist of considerable stature. Let’s hope that his expressed wish to make “an album a year” has similar substance. On the evidence of his debut, that would be very welcome.

Impressive songwriting debut from the husband of Margo Price