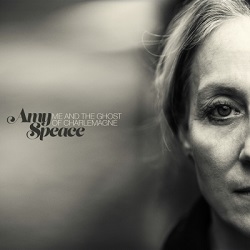 It isn’t until Amy Speace delivers the lines “Men and Women on all sides / trying hard to change your mind / there’s no way around the crowd / got to walk right through that line / don’t listen while they shout and pray / ‘cos they don’t know you anyway” that it becomes clear what ‘Ginger Ale and Lorna Doones‘ is about. And that the woman singing a pro-choice song was pregnant with her first child when she added “no-one gets here on a good day” really only goes to double underscore what the song is about. Choice. A choice which Amy Speace is making clear is getting harder to make in the USA of 2019. Not for nothing has Mary Gauthier nominated it as her song of the year. It’s so softly delivered, heavy with sadness as it leads the listener through the worst day of somebody’s life. And this is only one of eleven stand-out songs on ‘Me and the Ghost of Charlemagne‘. The title song is an epic that will likely remind many of Speace’s early champion Judy Collins. There’s the ache of a sparse piano accompaniment which leads into a song of the disconnection from reality that haunts the wandering troubadour delivered with such an exquisitely clear vocal that is brim full of emotion. There are plenty of such songs, but few of them make the case so reasonably “although tonight out there I felt close to the flame / By morning I’ll be hauling luggage through the rain / And though it’s rental cars and chain motels and cafes with clever names / sometimes it’s me and ghost of Charlemagne“. It’s the fear of not leaving a mark – even the Holy Roman Emperor ends up as just bones in a box.

Not that it’s all heavy themes across the album – ‘This and my Heart Beside‘, a “co-write” with Emily Dickenson, is a gorgeous love song. Delicate on guitar and violin, it is an untainted and unlimited declaration – which on reflection is a serious theme treated with the seriousness it deserves. Which could also be said of the album closer ‘Kindness‘ – just piano and vocal here, a plea that an unnamed person – but we could guess Speace’s imminent child – should have the fortune to know “goodness, may you know peace, may you know contentment, may you be at ease“. And amongst all the blessings there’s the hope that “may you know kindness and may kindness know you“. It’s a positive and optimistic desire, but there’s a bitter-sweetness from the break in Amy Speace’s voice which hints of an awareness that the world may not unfold this way. ‘Pretty Girls‘ is a complicated take on ‘At Seventeen‘ and ‘As Cool as I am‘ territory with Amy Speace watching the pretty girls who walk through the world, checking themselves in mirrors “to make sure they don’t disappear“. It’s not just an outsider’s envy of those who seem to just naturally belong, its a commentary on a societal need to conform to someone else’s ideal and as Amy Speace reflects that maybe “they are looking at me too, wondering what the pretty girls do“.

Amy Speace has produced an impressive album with ‘Me and the Ghost of Charlemagne‘, serious in intent and beautifully written, played and sung. These are not songs that are easily forgotten. In the crowded array of singer-songwriters there are precious few who are writing at this level, and fewer yet who can deliver their musical vision so completely and with such conviction. ‘Me and the Ghost of Charlemagne‘is not an album to be missed.

Amy Speace's new album is complex and literate and powerfully asserts its right to be heard.

About Jonathan Aird 1302 Articles
Sure, I could climb high in a tree, or go to Skye on my holiday. I could be happy. All I really want is the excitement of first hearing The Byrds, the amazement of decades of Dylan's music, or the thrill of seeing a band like The Long Ryders live. That's not much to ask, is it?

The Besnard Lakes “Our Heads, Our Hearts On Fire Again” – Listen

Perseverance is the lesson we learn today.  The latest single from The Besnard Lakes is taken from the new album ‘The Besnard Lakes are the Last of the Great Thunderstorm Warnings‘, and it has had […]