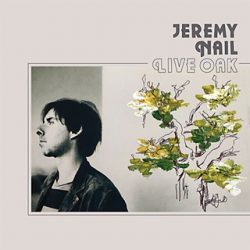 ‘Live Oak’ is the third album from Texan Jeremy Nail, just the name of the album along is strong with symbolism for Nail. The name of the album refers back to an oak tree in Austin, Texas, that almost didn’t survive after someone poisoned the tree in 1989, but it did. This relates to Nail after he was diagnosed with a rare form of cancer, which led to him needing his leg amputated.

The opening song ‘Abiquio’ sets the tone for the album with the poetic nature of the song.  Its quite a haunting song as he paints the picture of a New Mexico town, Abiquio, which is desolate town, but once you leave the town the road opens up to red cliffs. Nail wanted to show how closely intertwined beauty and suffering can be.

‘Rolling Dice’ is a standout song on the album; right from the start it takes on a different style than the rest of the album, from the rhythm to the pedal steel guitar. Like the rest of the songs on ‘Live Oak’, the song is full of imagery, but unlike some of the others it is a bit more playful with the delivery compared to the predominantly acoustic album.

The album as a whole is full of symbolic songs that reflect on Nail’s life and travels using a predominantly acoustic narrative.

From start to end a very personal and symbolic album