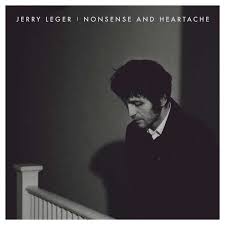 Jerry Leger is a Canadian singer-songwriter who hails from Toronto and ‘Nonsense and Heartache’ is a double album with two distinct takes on his songwriting. ‘Nonsense’ is wired hillbilly blues with a wild swagger; there are elements of Chuck Prophet and his previous incarnation Green on Red, particularly in the ghostly 12 bar of ‘On The Fishing Line’ with it’s echoey, snarled vocal and sensational lead guitar. There is also a side order of the marvellous Cracker in the nihilistic ‘For HIre’ with is juicy rhythm guitar and twitchy lead. This all means that ‘Nonsense’ or disc 1 of this double is a joyous salute to the redemptive powers of the plugged in and raucous tempered by some very smart songwriting.

The songwriting remains smart on disc 2 or ‘Heartache’ but the amps are turned down and the subject matter of the lyrics is more reflective. It starts slowly and as a step change from disc 1 takes some getting used to but by the time ‘It Don’t Make The Wrong Go Away’ comes around with its earworm of a melody delicately couching the heartfelt lyric, the listener has changed gear too.

It must be noted here that the production Michael Timmins keeps everything sharp and fresh without losing the warmth of the softer instrumentation. Highlight of the two discs is the piano ballad ‘He’s The Lonely One Now’ which is simple and affecting with its haunting guitar backdrop. For my money ‘Nonsense’ is the disc that will get more plays but both are worth the admission price, and with an upcoming tour in April Jerry Leger may be about to break in the UK. I advise you to see him: on this evidence, he will not be playing small venues for too long.