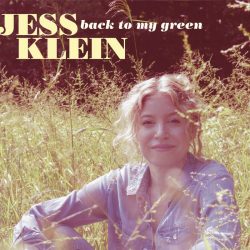 Just as the generations have always offered up explosions of outstanding peer collectives down the ages,  so it seems that lately there has been an outbreak of gifted female americana singer-songwriters. Not that Jess Klein is exactly hot off the press – her career spans nearly two decades. She does, however, have an uncanny knack of reinventing herself and is a modern day inspiration for the newcomers that have flooded the scene in the last couple of years.‘Back To My Green’ is Klein’s first album since getting married and leaving the “Live Music Capital” of Austin, Tx for the more rustic pastures of Hillsborough, North Carolina. She has also had to struggle with a recovery from a repetitive strain injury to the wrist which affected both her playing and writing, so it is no doubt with a sense of triumph that she has resurfaced five years down the line in NC with another rich collection of eclectic folk americana to her name.

From the opening country-tinged bars of ‘In Dreams’ it’s clear that these are songs born of intense personal growth and there is an underlying theme of mental health reinforced with faith and hope throughout ‘Back To Green’. Teaming up with producer Mark Simonson (The Old Ceremony, Weems/Gerrard Band) has allowed Klein another level of freedom which has helped open the floodgates to an even wider audience. ‘Tougher Than I Seem’ will resonate with many, but certainly any lonely up and coming young musician on the road should give this track a spin, lie back, listen to Klein’s  comforting assurance that ”For every time my dream has been denied/I’ve earned my pride” and find the strength they need.  There’s a new direction on songs like ‘Mammal’ which is lyrically delicate but ultimately self-confident. This track veers into funky riff-trading over bare-bones drums and slowly building crescendos, yet for all that it’s very much the same folksy Jess Klein beneath the musical tangents. The subtle complimentary contradictions are a sign of a mature but still refreshingly original songwriter . But there’s more variety to come as she returns to her activist roots in ‘Blair Mountain’, a no-holds-barred barrage of bile aimed at corporate industry’s attacks on nature. The acoustic guitar and piano-led melody of the title track is a step back, perhaps a step back to the green that is NC. Who knows?

What’s clear is that when the bluesy, gospel-infused  fires of a track like ‘Gates Of Hell’ can be found in the same broad church as the soothing, maternal words to the wise as those on ‘Kid’, then here is a singer- songwriter who has found not only her place in her world, but also one for all those new arrivals on the scene to look up to.

Whether coming of age or starting over again, Jess Klein keeps the dream alive.