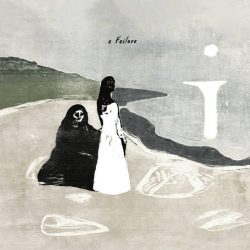 A record titled ‘A Failure’ is hardly likely to be brimful with positivity, however, Canadian singer-songwriter Jim Clements clearly prefers to deal with the darker side of life.  His fourth record is a completely introspective affair, and Clements has had total control over the creative process with this being his first self-produced release. The writing style is almost entirely delivered from a first-person perspective, and Clements adopts various personas over the eight tracks.

Unsurprisingly, most of the stories deal in tragedy and with him seeking forgiveness in some way. On the piano-led ‘Not A Lot Of Blood’, he sings “Don’t say I’m bad, I’m not, I’ve got blood on my hands, but not a lot” as he desperately searches for some form of validation despite his evident flaws.

‘The Advice Song’ delves into these flaws by delivering lessons learned from someone who has suffered. Clements laments “Don’t read a book, nothing that you love can change anything… Don’t share your thoughts, No one cares what you think, they’re just waiting for their turn to talk” for over four minutes and the simplistic format gets old very quickly, becoming far too self-absorbed.

For all its lyrical introspectiveness, the record never really feels cathartic for anyone other than its creator. ‘The Backup Plan’ is uninspiringly flat, and ‘Why You Scream In The Night’ is only made listenable by the excellent sombre violin which flows through it.

The finale, ‘Fire Engine Blues’, is the saving grace. Clocking in at twelve and a half minutes, which absolutely fly by, Clements plays the role of a guilty man sent to jail and is emotive enough to make himself believable. Uplifting piano contrasts the bleak lyrics, and chimes through a gorgeous chorus.

‘A Failure’ flows better than any of Clements’ previous output and gets better when given repeated listens. However, with little sonic variation other than a string section peppering some tracks (and often masking their mediocrity), it suffers greatly from being too linear. The Canadian’s music can easily be pigeonholed into the “morose male singer-songwriter” category and Clements does nothing significant enough on this latest release to separate him from his contemporaries.