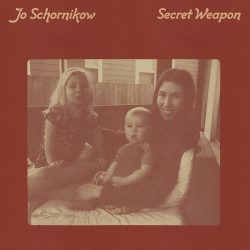 This album raised two questions – what are the furthest limits of Americana and how do you review music that is not inherently to your taste, but is likely to appeal to someone, somewhere?  Both these issues led to some interesting discussion with AUK headquarters.  Beware of investing in this debut offering if you think it sits at the heart of what you might think of as Americana.  Of course it may not be intended as such and may just be the right music reviewed in the wrong place by the wrong person.  There are those who think it, ‘gorgeous bare bones indie-folk’.  You might struggle to agree.

There is limited melody and few tunes that could be termed memorable.  The music’s minimal low-fi approach (originally recorded at Schornikow’s house) creates a certain mood but also perhaps reminds us that such an approach requires expertise in itself and just as much skill as would complexity, in order to be convincing.

Schornikow has impressive credentials and as well as being the partner of Matthew Houck in both music and life (I think we’d give him an Americana badge wouldn’t we?) she has also played with, among others, King Creosote.  You can give him whatever badge you like but it surely has to be a good one?  Whilst this is apparently her first solo album I wonder whether she yet has the abilities of a leader rather than a side person; evidently sought after by a range of renowned musicians.

This album, made with her old college buddy Shane Byron, consists in the main of keyboard washes and half-spoken vocals with some drum beats and occasional low key guitar that adds a little interest.  Schornikow started as a church organist and jazz pianist, however, that does not mean that there is an abundance of variety here. It has to be said that if you like the mood it sets then it is consistent. ‘Only One’ has some nice pedal steel in the background and something that does appeal is that Schornikow is definitely singing in her native Australian tongue and not adopting the pseudo-American tones beloved of so many. One reason why I have always loved the Proclaimers – Scottish people singing about Scottish things in Scottish accents!

Her voice is not strong, though, and she needs care to match it to the material. The subject matter of this exceptionally short disc (though strangely described as ‘full length’) is motherhood, though, unfortunately with hard to catch vocals; they can be accessed on the artist’s website.

There is material on YouTube including a short concert recorded at the Paste studios and Schornikow comes across as a likeable and sincere woman.  For those of you wanting to see her contribute at a high level you can also look for some Phosphorescent material – ‘Terror in the Canyons (The Wounded Master)’ – musically, vocally and even, lyrically, a step up.

A first effort and hopefully better to come from a young artist?