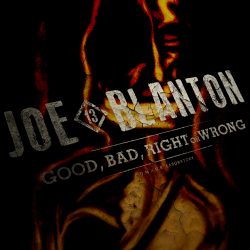 It’s easy to get lost in the weeds these days as we find new ways to compartmentalize and format music. Rock and country seem to be endlessly hyphenated.  Sometimes we need to stop the chin scratching, step out of the woods, and crank up the amps.  Thankfully, Joe Blanton seems to do just that with his first solo effort, ‘Good, Bad, Right or Wrong.’

Joe Blanton has been sharing his full-throated howl with the world for the better part of 35 years now, first as the front man for the Royal Court of China, releasing two albums of hard jangle roots rock on A&M in the late ‘80s.  He eventually joined forces with lead ex-Georgia Satellite Dan Baird and Jason and the Scorchers guitar-slinger Warner E. Hodges (who had themselves by then formed Dan Baird and Homemade Sin, which Blanton helps produce) and launched the Bluefields, a no-nonsense rock and roll band with Brad Pemberton (Steve Earle) on drums and Baird holding down the low-end.  The Bluefields released three albums of high-octane southern-fried fun before, at the urging of his bandmates, Blanton decided to start work on his first solo project.

In the grand tradition of Todd Rundgren, Prince, and John Fogerty, Blanton wrote, produced, performed, or programmed all the instruments on ‘Good, Bad, Right or Wrong,’ with the exception of occasional B-3 and backing vocals from Baird (who also co-wrote five of the ten tracks) and his wife Whitney, who contributes vibraslap to the driving, Scorchers-influenced ‘Here is my Song.’

‘Along for the Ride’ sets up the journey ahead perfectly with a deliberate groove and a rock and roll statement of purpose. ‘Wearin’ Me Out’ wears the Baird sound and sensibility on its sleeve. The extended vamp at the end allows Blanton to show off his soloing skills, and he can more than hold his own.

The minor-key ‘Forgetful Heart’ harkens back to the glory days of ‘80s rock in the best way; all big guitars and drums, soulful B-3, and arena-ready chorus. Could’ve been right at home on the Sats’ ‘In the Land of Salvation and Sin.’

‘Love is Heavy’ is the standout track. With a riff that’s part ‘Revolver’-era Beatles, a southern-gospel chord progression, clever lyrics about the power of love, and a truly anthemic chorus, it’s just about as perfect a rock song as you’ll find – no qualifier or hyphen needed.

‘Americana Breakdown’ may sound like the most “Nashville” moment here, but it’s all Fogerty, Springsteen, and yes, Baird-esque rock and roll storytelling complete with hard-luck characters and a twist at the end that ties it all together.

While it contains the best elements of country, blues, soul, gospel, and the best power-pop, Joe Blanton’s first solo outing is what used to be called just good ol’ rock and roll, and that’s all you need to know. With strong lyrics that actually say something, loud guitars, pounding drums, and hip-grinding grooves, the only thing ‘Good, Bad, Right or Wrong’ is missing is the Oxford comma.