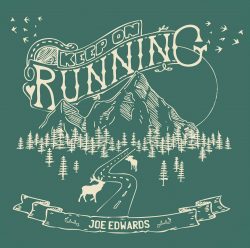 The natural inclination for Americana buffs may be to head SxSW to Texas in search of new and interesting talent to add to bulging collections. But hey, how about heading W-S-W from London instead, to the small market town of Devizes in Wiltshire. Perhaps not known as a regular stop on the trail of musical heritage, it does in fact holds its own for a town of less that 12,000 in rural England.  Bursting out of Devizes has come Andy Scott from The Sweet, as well as Jed Elliott from glam rocker reviving The Struts. That is before we mention Simon May,  who composed the theme for East Enders (not to mention 80’s yachting-based drama Howard’s Way; readers of a certain age may pause to reflect that their teenage giggling at the sartorial elegance of Ken Masters is less funny now their own tastes seem to be aligning). Anyway, the latest talent to hotfoot out of the musically thrumming Wiltshire town is Joe Edwards with his debut album ‘Keep On Running’.

Joe’s story is one of a boy immersed in the music he loves. At 16, Joe was waiting tables at a coffee shop when he decided it was much more exciting to display his talent for guitar by playing covers of his favourite and heroes –  Jimi Hendrix, Stevie Ray Vaughan and B.B King songs in local bars in and around town. He went on to study music at the Liverpool Institute for Performing Arts ( Paul McCartney presented him with his degree). While studying he widened his sphere of influence from the blues to the great American songwriters such as Bob Dylan, Tom Petty, James Taylor and Paul Simon.

In true musical tradition he paid his dues, in fact as the drummer for Australian folk-rock band The Wishing Well, and it was there ‘ Keep on Running’ had its genesis in scribbled notes of ideas, observations and inspirations. And so ‘Keep On Running’ is the culmination so far of that journey. It might be easy to point out it is thick with the tropes of the genre, with the ubiquitous travelling tune in ‘Cross The Line’ line ( where exactly is that for Devizes? Presumably the thrilling leap from Wiltshire to Dorset, though Joe does say he is heading West, so probably Somerset). Plus there is the trusty vehicle of down-on-your-luck chronicling in ‘The Gambler’; (this guy is “Six dollar short” and from New Orleans so definitely not the south west of England). Then there is a wrestle with worry and outrageous fortune on ‘Trouble’; paeans to progress and travel in ‘Keep on Running’, ‘Driving Home’ and ‘Back on the Road’ as well as sticking-it-to-the man on ‘Don’t Let The Bastards Get You Down’. But for all the xeroxing of familiar themes the album absorbs and reflects its interests and influences in a satisfying way. And, flippancy about location aside, it is the product of a well-travelled and very talented musician. Edwards delivers his songs with an intensity and  earthiness born of cutting the eleven tracks over ten days; allowing voice, drums, guitar, double bass and the showings of dobro and pedal steel to knit interlace in a near live experience. or often laid back blues folk.

The songs – and not just the lyrical matter- are evocative of many of the greats. Is it any wonder that ‘Cross the Line’ should bring to mind Ry Cooder? Or ‘Capital Blues’ the mellow blues-rock of Clapton’s late 70s early 80s albums? There are no rip it up tracks on the record, but there are 11 solid songs of from a man on a musical journey.