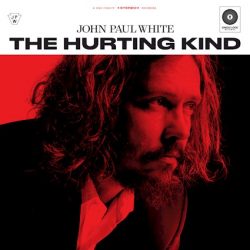 John Paul White is no stranger to working with high-class musicians and in high-class musical situations. Originally one half of Alt-Folk duo The Civil Wars, John Paul White releases his third solo record ‘The Hurting Kind,’ on Single Lock Records, of which White is a co-founder. ‘The Hurting Kind’ was recorded at White’s new home studio in Florence, Alabama, as well as the legendary FAME Studios in Muscle Shoals.

The personnel credited on this album can be described as nothing other than impressive. White sought out songwriters “Whisperin’”Bill Anderson and Bobby Braddock to team up with during the writing process. Commenting on his collaborations, White said, “Coming out of each and every one of these situations, I got a resounding thumbs-up that I was on the right track. I didn’t need anybody else’s approval after that.”

White lists Jim Reeves, Roy Orbison, Patsy Cline, Chet Atkins and Bill Porter as influences for this record, feeding off the music created in Nashville in the early ’60s. Their influence can be heard in tracks like ‘You Lost Me,’ ‘Yesterday’s Love,’ ‘Heart Like a Kite’ and ‘I Wish I Could Write You A Song’ which features a gritty and well-placed baritone guitar, beautiful pedal steel lead lines (on a personal level I’d call pretty much anything with a pedal steel beautiful). John Paul White’s vocals are suitably soulful on this track, nicely cutting in the mix and very textural, bringing out all of his positively delicate voice. This track builds to a passionate climax at the end of each chorus, incorporating romantic and anthemic string arrangements.

The real stand out song on ‘The Hurting Kind’ is the track ‘James.’ What really catches the ear is the unpredictable melody played by the acoustic guitar in the intro. When the bass comes in with root notes it adds a new element with a more traditional chord structure. The pedal steel (still beautiful) adds atmosphere throughout, along with ambient backing vocals in the final chorus, which builds the song up to a suitably strong ending.

Although this record mainly focuses on a sound reminiscent of ’60s era Nashville, White occasionally jumps into poppy-er tracks with catchy vocal lines such as lead single for the album ‘The Long Road Home,’ The Good Old Days’ and ‘This Isn’t Going to End Well.’  Although it’s nice to hear some tracks that are more uplifting and have memorable hooks which work successfully for the most part, they also verge somewhat into commercial country-pop territory, which detracts from the traditional sounding nature of the album that White set out to achieve when writing ‘The Hurting Kind.’