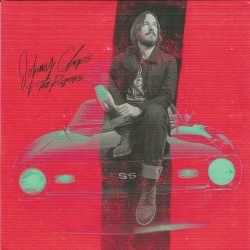 Johnny “Chops” Richardson is a member of established Texan outfit the Randy Rogers Band, where he’s held down the bass player role for the last sixteen years. Here he steps away from the bass guitar role to front his own band as guitarist, vocalist and writer on what is his second solo outing. It’s a solid, competent recording, as you’d expect from a band of all star musicians – drawn from the likes of Reckless Kelly, the Miranda Lambert Band and John Fogerty’s touring outfit – well produced by Johnny Chops himself and Reckless Kelly guitarist David Abeyta.

The album gets off to a good start with opening track ‘Believer’, a muscular country blues with a good groove, but by the time you get into the second track there’s already a feeling of déjà vu and there lies the problem with this album. Johnny Chops hails from Lubbock and is now based in Austin, both cities that pride themselves on their music pedigree. The big problem with coming from or being based in an area with a reputation for producing great music is that it’s often difficult to break away from a certain sound associated with that region. Think of Liverpool and the sound of Merseybeat, or the country sound attributed to Nashville. You can make music in these places and still forge your own sound but it’s hard when you’re surrounded by such strong influences and the problem with this album, good though it is, is that you’re constantly hearing the influences of other Texan bands and musicians. The guitar sound uses a lot of distortion and there’s a strong relationship between the guitar and the Hammond organ on a lot of these tracks – so you get songs that are reminiscent of Stevie Ray Vaughan tracks or, to these ears, the likes of Delbert McClinton, on fourth track, ‘Tombstone Flowers’,  you’re reminded of early Joe Ely, penultimate track ‘Rock Bottom’ is a straight twelve bar boogie done in the style of the Fabulous Thunderbirds.

There’s nothing wrong with having influences but the problems come when that’s all you can hear, a situation not helped by a group of songs that seem to come straight out of some sort of “Texan Songs for Dummies” self-help book. Richardson does write some good, if slightly predictable, melodies and he certainly has a way with a good guitar riff but lyrically we’re in fairly uninspired territory. “There’s two kinds of weather down Texas way; the heat of the night and the heat of the day” from the track ‘Ten Cent Talkies’ is fairly typical of what’s on offer here. On the slide guitar driven ‘Gimme Sugar’ we hear “you gimme sugar, I love it ‘cos it tastes so sweet…..I don’t need no money, you can have it all down to the last dime. One drop of your honey is all I need to keep me satisfied”. You don’t have to be a great poet to write a good song but trotting out hackneyed lines like this just adds to the feeling that you’ve heard it all before.

This is still a decent enough album. Both Johnny Chops himself and the band are very good musicians and the tracks are all very listenable but that constant nagging feeling of familiarity means the album has no real impact. The best track is probably the only cover, a decent re-working of the old Willie Dixon classic ‘I Just Wanna Make Love to You’, on which Johnny Chops is joined by Brandy Zdan, ex of The Trisha’s and now making a name for herself as a solo artist. It works really well as a duet and the arrangement sounds fresh and different. Johnny Chops just needs to apply that slightly different approach to his own songs.