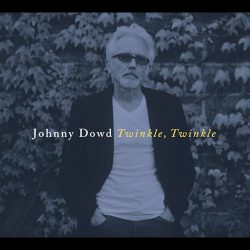 From beneath the waters of this dark and eerie sonic soundscape emerge some of the most well-known songs in the American canon. The songs on this fine album are as familiar as, well, ‘Twinkle, Twinkle Little Star’ – the title cut – along with ‘Tom Dooley’, ‘Oh My Darling Clementine’, ‘Red River Valley’, ‘St. James Infirmary’ and ‘House of the Rising Sun’. But it’s a safe bet you’ve never heard them done this way. Dowd is highly original, even eccentric. Sometimes these songs, familiar as they are, can be recognised only by the lyrics.

This album is dominated by dark, deep electronic sounds, anchored by a heavy beat. Dowd is credited with playing ‘all instruments’, but there’s little here that will remind you of any instruments you’ve ever heard before. The vocals are also handled mostly by Dowd. But ‘intones’ would be a better word than ‘sings’. Mostly he just speaks the words.

This isn’t an album you’ll put on when your Aunt Clara comes for a visit. Nor will you dance to it. Of the 13 tracks, only the opening cut – ‘Execute American Folklore, Again’ – was written by Dowd. All the others are songs for the ages. There are no spaces between the tracks. One song sinks into the sonic depths; then, soon enough, a new song emerges from the electronic murk. While the album cover lists 13 tracks, this is really one 36-minute long meditation on the great American songbook.

Dowd, 69, didn’t begin his music career until he was nearly 50, when he released the album ‘Wrong Side of Memphis’, devoted to songs of sin and murder. The album turned him into a cult figure; since then he’s released one unconventional album after another. The music can fall harshly on the ears on first listen. But the album grows on you. And while it’s not dance music, it definitely has a beat – deep pounding drums punctuate the songs.

This, in short, is a work of creativity and imagination – the work of a highly unusual mind. You’ll hear some of the most familiar American songs of all time, reinvented as if they’d been run through a mad computer. But madness and genius are closely related. ‘Twinkle, Twinkle’ is an album that, over time, will speak to you in many different ways. This one’s a keeper.

Johnny Dowd offers a dark and eerie take some some of America’s best-known songs.