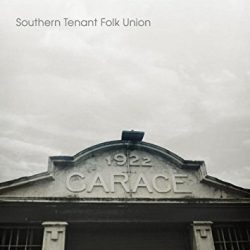 If you haven’t heard of them before, Southern Tenant Folk Union have been around for a while, ten years to be precise, and to celebrate this achievement the Edinburgh based 6- piece have decided to reissue and remaster their debut album which saw them garner a lot of attention in terms of radio airplay and live opportunities.
The songwriting present on the record is of an incredibly high standard leaning further towards the more folk and bluegrass side of the ever-undefinable Americana bracket but channels that roots sound very well, combining it with modern songwriting sensibilities and naturally, the lyrical content to match the time it was recorded, as opposed to the time the sound reflects.

Production-wise, the album, even in its remastered form, doesn’t sound as good as it could however, the story behind the recording is that they recorded the entire thing in a flat somewhere in the streets of Edinburgh so it isn’t surprising that the quality lacks however, that is not to say that it isn’t listenable or enjoyable by any means, as the instrumentation is clear throughout and the perfectly-layered and delivered harmonies evident on every song have enough clarity to be able to pick them out and appreciate the craftsmanship that must have gone into creating them. One melody in particular, the opening to Mosul Train is seemingly borrowed from another great folk-singer before launching into an upbeat, bluegrass stomper which, whether a conscious decision or not, is a shame given the level of creativity on offer here.

A 10 year anniversary reissue wouldn’t be a 10 year anniversary reissue without the addition of some bonus tracks and Southern Tenant Folk Union have treated us to a number of live songs from the album recorded in various locations and they truly are a spectacular listen. The band are able to recreate, almost perfectly, the sound of the records including the complex harmonies, the vocal melodies and each of the stringed instruments from the record itself and are testament to a band that clearly put a lot of thought, time and effort into writing and rehearsing their songs and how much that has paid off in a live setting.

Southern Tenant Folk Union celebrate their debut album with a reissue and very rightly so!