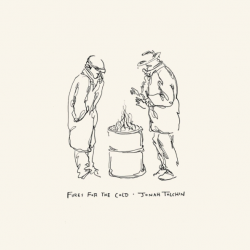 Jonah Tolchin grew up surrounded by music; his father worked at a record store in Mississippi, and Tolchin fell in love with the blues at a young age. As a teenager he met legendary guitarist Ronnie Earl, after which he became obsessed with making music himself. He hit the road straight out of high school, and  self-released an EP and an album before making his debut at the historic Newport Folk Festival in 2012. In the following years he signed to Yep Roc records and continued to produce music – his first studio release in 2014 garnering much praise from the music press. ‘Fires For The Cold‘ is his third solo record for Yep Roc, having spent some time persuing a duo project called Dharmasoul over the last couple of years. ‘Fires For The Cold‘ is Tolchin’s most mature, self-reflective album to date, full of great songs and wonderful sounds.

Tolchin was divorced shortly before beginning work on the album, and by his own admission it was a difficult process. The songwriting became a catharsis, and this shows. There are many finely crafted, emotional songs on offer here. The musicianship is top-notch, too, with a host of legendary session musicians making appearances, including Greg Leisz, the pedal steel player who has worked with seemingly everyone, from Joni Mitchell, to Randy Newman, to Springsteen.

The calibre of Tolchin’s craft, and that of those he works with, is undeniable; but more than this, there is a steady depth to the album which really makes it stick in the heart. There isn’t much that jumps out and grabs you, in the traditional sense, but there is a gentle beauty in this fact. The record swirls around you, bathes you in shafts of sunlight, with little motifs of pedal steel and organ, and a constant shuffling rhythm which keeps it all driving along at just the right pace. This isn’t your classic angry breakup album, the songs are mature and reflective in nature and this is completely matched by the overall sound of the record – it’s not really breaking any new ground, but so what? What it gives you is so authentic and blissful that you won’t care.