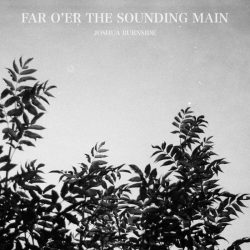 In these times of uncertainty, there is something to be said for the comfort of the familiar and traditional, and that’s exactly what Joshua Burnsides offers up on his latest EP, ‘Far O’er the Sounding Main’. While this collection of five traditional folk songs was recorded by Burnside at home during the COVID-19 lockdown, they still sound very much like fully realised recordings.

‘Lambs on the Green Hills’ is the first track, a deceptively innocent-sounding tune but one that holds sinister lyrical undertones when analysed (a man, so heartbroken over the marriage of the woman he loved to another, declares he’d rather be dead). Next, ‘Eileen Aroon’ is a similar tale of love, this time of a woman being admired from a distance for her great beauty. ‘Kitty May’ is a short instrumental piece that’s sandwiched in the middle of the tracks, creating a natural bridge with its classic folk sound that’s in perfect keeping with the rest of the EP. ‘Come My Little Son (England’s Motorway)’, coming from the perspective of a story being told to a young child of their father working away, has a soul-soothing warmth about it. ‘The Bonny Bunch of Roses’, a song which imagines a conversation between Napoleon and his mother, plays us out, with a rousing and uplifting chorus of backing vocals.

Burnside stays true to the traditional roots of the songs, but his delivery still manages to be fresh and engaging. While all five tracks offer a homespun warmth, they are anything but rough around the edges, with violin and cello layered against banjo and guitar, complementing Burnside’s pleasant vocals.

Northern Ireland native Burnside dedicated this release to the people of the Sailortown Folk Club in Belfast, the place where he heard some of the songs he recorded here for the first time. Let’s just hope once the present situation is over, that Burnside will be able to return there and put in a performance as fine as the one he gives on this record.