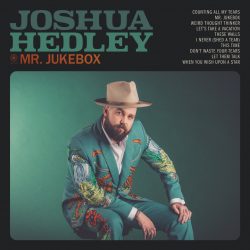 Third Man Records is associated with Jack White’s crusade of rescuing the recording industry from the crushing banality of the digital sound and over commercialism that accelerated to the saturation point it currently enjoys. So what’s the story with the debut release from Joshua Hedley’s ‘Mr Jukebox’? Hedley is a highly respected sideman whose fiddle playing is regarded, quite rightly, as sublime by the Nashville trad. and alt-country community.

This is surely too traditional a form and that is the point. As Hedley states; “Class is timeless, like a good suit!” and if trad. country is your thing then this is a sumptuous treat that sounds both authentic and appealing, even to a reviewer that normally avoids the Ol’ Opry by any means necessary.

The album opens with a classic croon ‘Counting all my Tears‘  as Hedley holds the fiddle in reserve, deploying instead his deep and rich ‘made for country’ voice. ‘Mr Jukebox’ is a more upbeat honky-tonk stating the artist’s modus operandi along with a flash of that fiddle playing. But the first real belter is ‘Weird Thought Thinker’ with the fantastic production bringing together some muted harmonies that hark back to the Ray Conniff singers’ style and some very classy playing over a vocal talking about the road. Next up is the romantic ‘Let’s Take a Vacation’ with its gentle waltz beat that will be the last dance of the night for many years to come in the honky tonk bars. The backing vocals nod their heads to the Elvis classic ‘Are You Lonesome Tonight’ as Hedley drops the croon and speaks of his dreams all the time cushioned by the lush instrumentation.

So this is a fantastic album that faithfully recreates the sound and sentiment of those classic country albums from the sixties. The production, as you would expect, is faultless and the songwriting absolutely spot on. Is it a pastiche? That’s the big question; the album artwork certainly signals an intent. Are they doing this as an exercise in re-creation?  The answer is a resounding “no.” There is too much joy, swagger and sheer brio here.  Josh Hedley deserves to be huge and this will make him so with a particular audience. Will he crossover?  That’s a tougher question. The work is good enough. Certainly.

Wonderful straight down the line country album from the top of the draw marked Nashville.