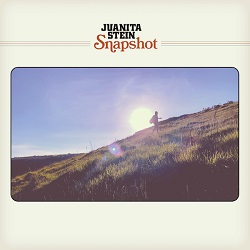 Australian born but UK residing Juanita Stein has become a significant fixture on the Americana scene in this country, originally as lead singer with Howling Bells and more recently with her solo career from which ‘Snapshot‘ is her third full-length release.   It’s an album that features plenty of trademark Juanita Stein flourishes – there’s spikey guitar work courtesy of her brother Joel Stein, Juanita Stein’s own vocals which can veer from the laidback and ethereal to direct and in-your-face within the space of a single song.  ‘Snapshot‘ does represent something of a shift in recording strategy though – the previous two albums were laid down over the space of a couple of weeks whilst ‘Snapshot‘ took a luxurious eight months.The album was also steered by producer Ben Hillier, who’s work with the likes of Clinic and Elbow had impressed Juanita Stein.   The biggest change though was the adoption of an album concept – the songs were inspired by, or were reflections on aspects of, her father who had died suddenly.

Not that this underlying inspiration for the songs is always apparent – although the title track makes the clearest references to loss and pain: “You are a snapshot in my mind all I can do is build the frame access the memory again / I call your name / no-one’s there / There’s no spell to ease the pain / Only a photograph remains.”  It’s a song that builds from sparse to a crashing psychedelic crescendo, with Stein floating amongst stardust – which can’t help but make that connection that we’re all made from stardust and we go back to being that same dust in the end.  ‘Hey Mama‘ builds on these feelings of loss as Juanita Stein muses on familial thoughts – with some thoughts spilling out unbidden aloud – and that hint of a separation in the chorus “everyone’s riding on the same old train / It’s going to take us home one of these days / And I’ll be with you, we can sing the blues.”

It’s not all quiet reflection though – ‘L.O.T.F.‘ buzzes and grinds, showing that Clinic influence most clearly with discordant guitar, a doom-laden drum beat and keyboard riffs that hint at the hymnal. A glorious noise in short, as Juanita Stein relates a tale of taking “my guitar to the city and I never looked back” which hints at the partially autobiographical.  ‘Lucky‘ is all reverb-heavy guitar as Stein expounds on a know no fear attitude: “I say feel fear and do it anyway / they can try to change you – but they don’t know that you feel fear and do it anyway / Nobody ever broke you“.  Is this Stein on herself, or on her father?  Or both.   There’s ambiguity, as there should be. ‘Snapshot‘ is an album that retains interest across its ten songs because there is no solid continuous groove but there are different moods to the songs which knit together perfectly.

Juanita Stein carves out another significant addition to her Americana sound