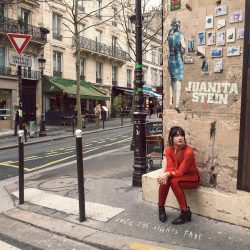 Juanita Stein’s debut album, 2017’s ‘America,’ created a splash and placed the Howling Bells singer firmly in the solo spotlight. That she’s back within twelve months with a sophomore effort is a clear sign that the Australian wants to swim the mainstream. Does the music match the ambition? Perhaps. Electric guitars dominate and the production from Stuart Sikes (Cat Power, White Stripes, Loretta Lynn) is sympathetic to Stein’s gentle vocal strokes and meandering melodies. Opener ‘All The Way’ shares spaces with the southern gothic stylings of, say, Lera Lynn, whilst single ‘Forgiver’ (written with Brandon Flowers when touring as support for The Killers) is a kind of spoken-word, Iggy Pop-fronting-Primal Scream kind of blues – all balls and bluster.

‘Release Me’ is a minor key masterpiece that perhaps should have acted as the record’s spirit guide and a thread to follow, but the driving beats and biting couplets (“sometimes the cool girls end up with the arseholes”) of PJ Harvey-esque rocker ‘Get Back To The City’ more than make up for any stylistic discrepancies that compromise ‘Until The Lights Fade’.

The wonky haze of ‘Silver Linings’ aims for the left field Spotify playlists, but it’s in the storm and drive of ‘Easy Street’ and ‘Fast Lane’ that the singer and strummer reveals the biggest glimpses of what lies between the stories and characters of this record. Closer ‘French Film’ fades in sounding like Ennio Morricone tuning up and the ten track album finishes where it started in the muted drums and crackling electric guitars of Americana street noir.

Switch off your electric light…

No trembling as Stein shoots for the solo stars