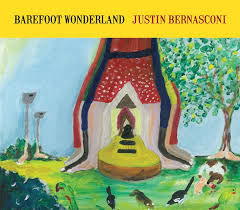 Although born in England Justin Bernasconi relocated to Australia in 2004 and formed The Stillsons in 2006. After three critically acclaimed albums he released his solo debut album Winter Pick in 2014, receiving a host of glowing reviews in the process. Justin returns now after a three-year gap with Barefoot Wonderland which is a mix of solo numbers and the accompaniments of band members Cat Canteri (vocals, Gibson Hummingbird guitar), Pete Fidler (Collings mandolin, Sheerhorn dobro), Ben Franz (double bass) and Jeff Lang (vocal). The result is a showcase for Justin’s spellbinding ability with his extensive guitar collection. Whether it be his 1960s Harmony Sovereign on Restless Legs Rag or his Martin D-28 7-string guitar on the title track Justin demonstrates just what a talent he is with whatever is put in his hand.

The manual dexterity he demonstrates will doubtless attract the positive attention of acoustic aficionados. Six out of the ten tracks here are instrumentals and, with the occasional vocal interventions, they seam effortlessly together to make up an album of low intensity but the highest quality. Justin straddles styles and sounds from the Delta Blues to Appalachian Bluegrass and English folk. The overall feel is that of a highly skilled musician playing to a rapt audience within an intimate setting.

Justin has faced crippling battles with insomnia, chronic fatigue, depression and recurrent nightmares and these provide the inspiration for Careless Shells and Melatonin and it is on these tracks that his modified 7 string Martin D28 is heard to great effect. But if pushed for one track to highlight the sheer musical proficiency and ability of the man it must be Box of Birds, which features Justin solo with just a ukulele for company. It is a mesmerising piece of playing.

This is an accomplished piece of work from Bernasconi, an album for the discerning acoustic lover and for those who appreciate the intricacies of a talent at work.

Showcase for an acoustic talent