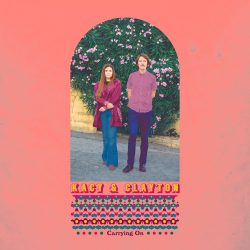 “Should’ve married for money, like any woman in her right mind would do / instead I settled for love and don’t you know that that’s the worst thing you can do.” So begins ‘The Forty-Ninth Parallel’, the opening track on ‘Carrying On’, the new album from Canadian country/folk duo – and second cousins – Kacy & Clayton, and their first since 2017’s acclaimed ‘The Siren’s Song’.

Hailing from the small, remote community of Wood Mountain, Saskatchewan, Kacy Anderson and Clayton Linthicum’s dry, dark humor seems to seep into their work effortlessly, as in the title track’s obsession with mortality: “Sometimes I think that I’m the only one who fears every second before it’s begun.” Comparisons could be made in that respect to the Carter Family and the tradition of escaping the reality of hard times, bad love, and mortality through humour and music, but Kacy & Clayton’s influences branch out much farther than their roots.

Produced again by Wilco mastermind Jeff Tweedy (who also helmed ‘The Siren’s Song’, Kacy & Clayton’s sound incorporates the traditional folk and country one would expect but doesn’t mimic it. They draw equally from the late ’60s cosmic cowboy sounds of Gram Parsons-era Byrds and the Flying Burrito Brothers, but again, these influences hover around the edges, quietly seeping into the cousins’ own thing.

At times, ‘Carrying On’ sounds as if it came from another time, or from no time at all. Kacy Anderson’s voice can be hypnotic, vulnerable, and sly – occasionally all within the same song. The music that surrounds it is evocative, adventurous, yet grounded in classic, familiar tones. The closing waltz, ‘That Sweet Orchestra Sound’ perfectly encapsulates Kacy & Clayton’s love for the traditional and their nod to the country-rock/psychedelia of Gram and Emmylou, while fully moulding all of their influences and inspirations into something all their own. A fine effort.