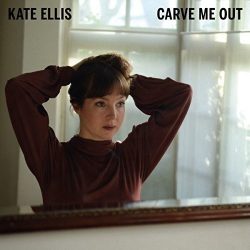 Kate Ellis has trodden an interesting path to her debut album. Born in Louisiana, with a father who once played guitar for Hank Williams, she grew up in New York with a gift for classical piano and is now based in London and a qualified lawyer for good measure. However, the most relevant point of all is that Carve Me Out is quite simply a superb debut album and one that announces the arrival of a genuine talent.

The album contains ten easily accessible tracks with varying shades of country and folk and display an impressive maturity and confidence in song-writing and delivery. Ellis has a voice that is easy to love and has been described as “a cross between Emmylou Harris and Suzanne Vega”; not sure on that as it is addictive enough to stand alone without comparison as a casual listen to first song Don’t Lie To Me will indicate.

Debut single Ones We Love The Most has received extensive airplay ad demonstrates the versatility of her song-writing skills, particularly when set aside the equally haunting folk hues of Night Before Dawn and the song that is crying out for release as a single Paper Scissors Rock.

Inside is more evidence of Kate Ellis’ ear for a tune and ability to fashion lyrics that tug at the heartstrings. On the evidence of Carve Me Out, London can boast a new Americana star of real potential.