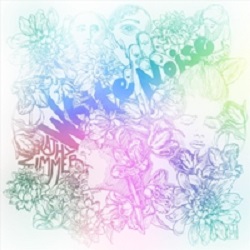 Kathy Zimmer’s EP ‘White Noise’ is self-described as “Cosmopolitan Folk”, which shouldn’t cause a flinch as it has nothing to do with glossy magazines featuring quizzes about “Is he really into you?”, and articles offering “Successful Secrets of a Sexual Kind” or even “Fifty top tips for the gas cook”. Nope. Cosmopolitan Folk is sophisticated songwriting, with lyrics describing finely observed situations coupled to complicated arrangements and sharp edged singing which cuts through with its combination of detached and sassy.

Backed by strings and guitar, and breaking out with some delicious percussive patterns, the title track eulogises white noise which makes city life bearable by blocking out extraneous input: “White Noise is erasing my brain / frequency of a sedative it lulls away any pain / and dulls the rhythm of the city”. It’s also a metaphor for Zimmer toning her personality down to better fit in with the expectations of others “I’ve tamed my frizzy hair /…/ I’m trying hard to reach you so I put on this disguise”. But really it’s about the difficulty of making human connections in a sprawling urban space: “So many ways to communicate / no-one speaks their mind /…/ I get a text instead of a hug”.  Zimmer’s soaring vocals are superb, drawing the parts of this smart and articulate song together into an aurally gorgeous bundle. There’s more great percussion on ‘True Blue’ which takes country and gives it a truly urban spin – not in the confused cowboy in town pining for open vistas and horses sense but more the country girl who has fully assimilated cafe culture and light rail riding, whilst still retaining – or perhaps clinging to – a trace of an earlier naivety.

All five tracks share a sonic sensibility, with layers of sound and the vocals to the fore with superb backup from The Sugar Bowls which adds a classic Girl Band feel to several songs. The songs are at turns serious and tongue-in-cheek, sometimes both at the same time, and paint a picture of the struggle of 21st century urban living with a sheen of positivity and bright colours.

On her latest release Kathy Zimmer takes a musical wander through her neighbourhood, and copes with the contradictions of modern living.