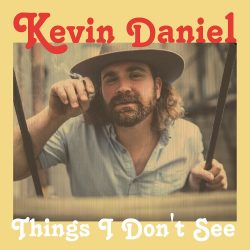 Prior to commencing a solo career in 2013, Kevin Daniel, a multi-instrumentalist, had played in a diverse range of settings from bluegrass quartets to big jazz bands. Daniel’s musical eclecticism is reflected in this album which shares with us twangy guitar, glorious three-part harmonies, Hammond B3 organ, strings and unexpected horns on some of the tracks. Tragedy haunts the title track, ‘Things I Don’t See’ which explores the moments before Daniel’s mother and step-father died in a plane crash.

This is one of the standout tracks and is reminiscent of former Byrds member, Gene Clark’s unsung masterpiece, ‘No Other’. ‘Pour Me A Drink’ is a slow country lamentation layered with singing lead guitar and warm harmonies; as soon as this song finishes there is a desire to be captured in its warm embrace once more. The up-tempo pace of ‘Feelin Good’ is augmented by horns and some great honky-tonk piano whilst ‘Jupiter’ seems to be begging to heard live to capture its true spirit that somehow feels stifled on the recording. The lyrical predictability of ‘Xanax Cocaine & Whisky’ disappoints and is not worth lingering over. There is heartfelt melancholy mixed with soulful lament here, intertwined with moving harmonic structures.

Daniel acknowledges that “loving and living ain’t fair” but he shows us that out of such experience rises deeper insight and a beauty worth listening to.

Glorious harmonies and soulful melodies catch you in thier sonorous embrace