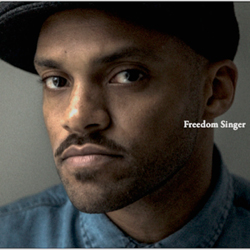 Originally from Detroit but now living in Canada, Khari Wendell McClelland began to investigate his family history some years ago, in particular the story of his great-great-great grandmother, a slave in the States who escaped to Canada via the underground train network set up by abolitionists. This led to him exploring the music of his ancestor’s time which he eventually worked into a multi media stage presentation which then led into this album.

Aside from one original number the album is McClelland’s reworking of traditional songs with occasional topical lyrics added and he and his players deliver the songs in a soulful fashion with elements of folk, gospel and rap infused within the arrangements. The album is a powerful and moving listen, the opening ‘Song of the Agitators’, a tuba driven gospel like number kicking off with a slave chorus looking forward to the day when, “the slave whip’s sound is still” but then goes on to lament the current state of affairs, “the stain of blood remains, a mother’s only son slain.” This ongoing blight of racism is referred to in other songs here with figures such as Harriet Tubman and Martin Luther King mentioned while crooked cops are the target in ‘No More Auction Block’.

McClelland notes that despite unyoking themselves by fleeing to Canada ex slaves didn’t find a promised land on ‘Song of the Fugitive’ while ‘Oh Dearest Mary’ is almost hymn like in its depiction of freedom being almost akin to a heaven on earth, its yearning verses leavened by snippets of a field recording of the self same song.  At times the album wears its stage origins on its sleeve a little too obviously, some songs coming across as set pieces which probably benefited from the live experience which included film. However there is a palpable sense of passion and anger in ‘Liberty Songs’ which has McClelland rapping about 200 years of injustice while his own song, ‘Never the Child be Sold’, is a chilling condemnation of slave auctions which recalls the likes of Rhiannon Giddens.

The album is a timely reminder that the USA is still not the land of freedom for many of its inhabitants and its attendant show could possibly sit beside the Broadway success of Hamilton.

A musical journey from slavery to black lives matter